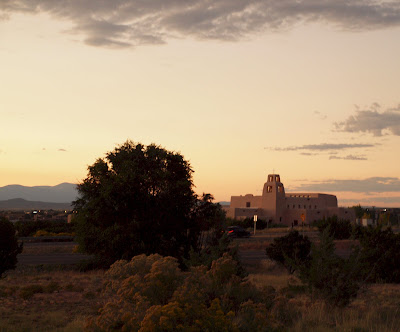 I took this during our photography class break last night at Santa Fe Community College. I love living here because everywhere you look, it’s lovely.

There’s been bruhaha the last couple of weeks over tussles between agents and writers. This is mainly turning up on blogs and the comments to them. This guy gives a good summary of recent events. I’ve never read his blog before and I don’t know him. I don’t really like his tone and attitude, but the links are all there. It’s also a good insight into how some writers are feeling about agents these days. What’s most notable is Michelle Wolfson’s response in the comments.

Michelle is an agent I chat with from time to time on Twitter. She’s amusing and provides intelligent insight to the business. Plus, she doesn’t really handle the kind of thing I write these days, so I can chat with her without feeling like I’m, well, kissing up.

At any rate, Michelle was annoyed about all this on Twitter yesterday and asked where this feeling is coming from, that all these writers think agents don’t respect them.

I told her I think it’s part of an overall trend.

Sure, we can look at social media, the intimacy of the publishing world and other familiarities that breed this closeness. Writers have to believe we’ve written the most fabulous book in the world, or we’d never finish writing it, much less withstand the grueling process of trying to get it published. Unfortunately, not everyone will agree with us on that conviction. When a decision is made based on whether it will make money, and the rejection is handed down, people feel hurt.

When people feel hurt, they lose all sense of humor and perspective. We all know this.

But that’s not my point.

I’m seeing this kind of thing all over. Something about the economic downturn has created an environment where people are wanting everyone to know just how hard their jobs are. One flight attendant I used to follow, both on her blog and on Twitter, finally turned me off because she kept posting about how little respect flight attendants receive, how difficult their jobs are and how much money they don’t make.

I can see, to a point, wanting people to have a realistic view of your profession, that it’s not riches and glamor, but after that point, it gets tiresome. We all struggle with difficulties in our jobs. That’s why they pay us to do them: because we wouldn’t put up with the grief otherwise. I don’t know many people who say that they get paid plenty enough. It’s human nature to dream about what you could do with more money.

It’s also human nature to complain when you don’t have everything you want.

I’m not sure what the ranting does for people, except maybe provide a vent. It reminds me of bitch sessions I’ve heard where people try to top each other with how badly their spouse behaves. People say they’re fighting for respect, but really what they want is validation and admiration. These writers complain that they don’t like agents who don’t show respect for writers. I think what they don’t like is agents who don’t think their book is the Next Big Thing.

It’s notable that the writers who are represented by agents don’t seem to they’re so awful. And no, I really don’t believe it’s because they’re cowed into silence.

So many people now looking at writers like Stephenie Meyer and thinking it should be them. Silly stories and easy money. We all want that job. More, a lot of people feel entitled to it.

The trouble is, none of us are really entitled to anything at all. And all the blog posts and tweets in the world won’t change that.

10 Replies to “Money and Respect”