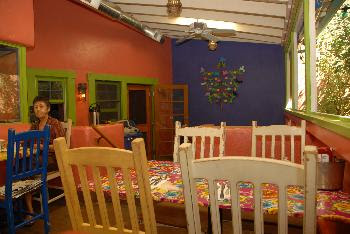 “Is soup for lunch okay with you?” David asked me.

I said that sounded fine.

“But is that what you really want?”

“No, I want Harrys blue corn turkey enchiladas, but soup is fine.”

David jumped on the idea, though and soon we were in the car headed to Harry’s Roadhouse (thanks to roadfood.com for the pic!), just down the way. Never mind that I’m supposed to be on the post-holiday diet. Or that we ate at Harrys only a week ago. In fact, we’ve been eating there about once or twice a week. We were both feeling blue for no good reason. I’d dreamed the night before that one of the agents who has my manuscript told me all the reasons it wasn’t any good and would never sell. David is watching his last few days of vacation slip by before the semester cranks into gear again. We both felt like a bug was working on us.

So we went to Harrys and waited only a few minutes for a table.

The hostess seated us in front of a window and began scrolling down the shade to cut off the southern sunlight streaming in.

“Don’t do that for us — we like it,” I said. She looked startled and said “okay,” but left it down. So, I opened it again. The man at the table next to us was staring hard at me and started to get up. David and I both thought he was going to be mad at me for opening the shade again.

This has happened before. No, really. I’m a sunshine kind of gal. I love nothing better than to sit in the sun. It’s a mystery to me why people in restaurants ask to sit by the window and then ask for the shade to be drawn. An even greater mystery: the shade pulling request is always accomodated over the shads open request. Why? Why? Why? People act if I’m unreasonable when I say I’d like them open. Shade closing always trumps other desires. Rodent people rule the world.

I realized I knew the man staring at me — had known him all my life. I called them Uncle Tom and Aunt Susan when I was a little girl. Their third child, Andrew, is the “envy baby” — born nine months after I was, because next-door neighbor Susan on the base in Selma was so inspired by my birth.

My “what are you doing here?” was quickly replaced by the realization that, duh, they were on their way from Colorado Springs to Tucson, to the house they’re renting for three months, once again next door to my mom and her husband, Dave.

We talked over lunch — no need to move our little two-tops even. We were all amazed at the serendipity of meeting up. Though I told them I hadn’t missed that they planned to blaze on through Santa Fe without saying anything to us.

I called my mom to tell her on the drive home, but she was already on the other line with Susan.

Tom and Susan pronounced it a good omen for their sojourn to Tucson, that so many pieces fell into place for us to be at lunch next to each other. David and I returned home, much lightened for the good company.

It’s something for me to remember, that for all the times I’ve feared I’ve missed opportunities, for all the rejections that seem like the end of the trail, that the universe delivers gifts also.

When it’s meant to be, it will be.