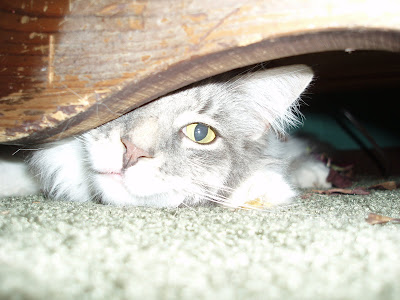 The other day as I was driving home, this woman pulled out in front of me.

I knew she was going to do it. I could see her from a ways off, watching the oncoming traffic to her right. Whatever it is that telegraphs what other drivers are going to do, told me that she’d already decided to go after that group coming from her right. She looked at me, now approaching from her left, but pulled out anyway.

She had already made up her mind, after all.

Much has been made lately of the split-second decision. The knowing without conscious thought, as in Malcolm Gladwell’s Blink. It’s an interesting concept, and I think Gladwell makes good points, in both Blink and Tipping Point, about how we decide, from life-mates to editors buying manuscripts. (Same thing?) This plays into what I was talking about yesterday, with how our brains filter information.

It’s important to be decisive. Without decision, you are paralyzed. Unable to act. And it’s nearly impossible to analyze all the factors that go into a decision in reasonable time to act. If you wait until you’ve analyzed every possibilty, every variable, the moment has passed.

Decision means to cut away — same root as incision, only you take it out instead of cutting in. You cut away your other options until only one remains

The important thing, I’m thinking, is that only one course of action remains for just that moment. If conditions change, you have to be ready to alter the decision. The lady in the other car made her decision, but she was then unwilling to let go of it when another factor, me approaching from the other direction, presented itself.

Much is made, also, of the ability to stick to decisions. To select a course of action and persevere regardless of obstacles. We’ve all witnessed the virtue in that. Countless stories abound of people who achieve great things this way. However, we can all think of people who persisted along a course of action regardless of the fact that it wasn’t working. If I decide to drill my way through a brick wall by banging my head against it, it’s likely my skull will give before the wall does, no matter how strong my resolve.

But then, it would be a bad decision in the first place.

I’m a fan of the bad decision, actually. I truly believe it’s better to make a bad decision than no decision. The paralysis of trying to make the perfect decision is excrutiating. The key is then being willing to constantly reevaluate the decisions I’ve made. To question the basis for them. Why did I believe my skull was stronger than brick at the time. Perhaps I should reconsider my assumptions.

It takes resilience and flexibility. Something that grows more difficult as we grow older. Just as our bodies tend to stiffen, so do our assumptions. Young people are sometimes derided for being flighty — changing majors and mates with flagrant flexibility. They are urged to pick one thing/person and commit.

Perhaps those of us who’ve gotten good at committing should be urged to reassess.