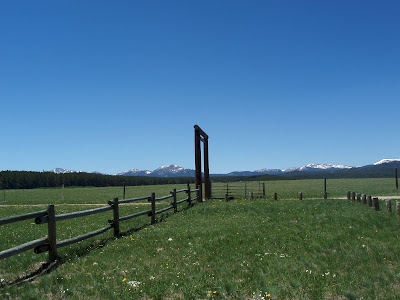 We went back to Wyoming for the first time in nearly two years, to go camping with David’s family. The landscape felt immediately familiar. Not like going home again, but like recognizing a part of your own body. I suppose Wyoming will always be a large part of me.

I hadn’t realized that before.

A lot of the things we do day-to-day are reflexive. We don’t really think about the influences that shaped us, the expressions we use.

A little while back, I was on a conference call with my boss. She lives in New Hampshire, but grew up in the South. The call was set up by a guy in the company who usually moves in different circles than we do. He brought us together with another company, which planned to bid on a project and needed the expertise my boss and I have. So, most of us don’t know each other – and Laurie and I are the only two women on the call.

He starts off saying, “Why don’t you lead off, [Dan], since this is your wheelhouse.”

She and I are on IM together. So I type to her “Did he say wheelhouse? Is that a boating metaphor?”

From there they talked about us being in a huddle, running the ball down the field, shooting from outside and loading up the bases. I kept playing “try to guess the sports metaphor.” It took some effort, because I am just so not a sports kind of gal.

The guys didn’t mean to be exclusionary, of course. If we’d pointed it out to them, they’d have been abashed and apologetic. We’ve told this story a few times and a number of men have said that half the time they don’t know what the sports metaphor means either.

But my boss and I have decided to Take Back the Metaphors. It’s time that those of us who did not grow up playing team sports introduce our own views of success. Some possibilities.

“Let’s run that one down the catwalk and see who snaps a picture.”

“With shorter hemline and some creative accessorizing, this could be a whole new project.”

“All we’re doing is slapping a fresh coat of cosmetics over the wrinkles – we need a full facelift here.”

And, offered by my niece while camping in Wyoming:

“That lipstick will never last 12 hours.”

So, please, join our movement. Use the metier of your choice and Take Back that Metaphor!

7 Replies to “Take Back Those Metaphors!”