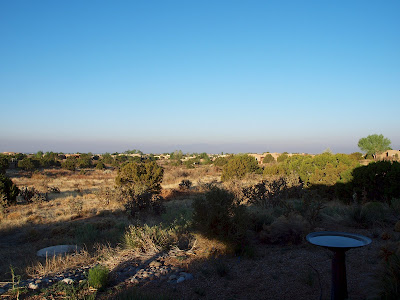 Smoke in the valley today. There’s a 60,000 acre fire near Alpine, Arizona. The smoke and ash blew in on us last night. Our patio cushions have ash all over them.

Apparently it’s worse in the valleys. People in Albuquerque were calling 911 to report fires. They were broadcasting bulletins to tell people to knock it off, that the smoke was from Arizona.

Not right *there* anyway.

It’s a funny thing, how what happens to our neighbors affects us. We forget that things are different for people just a state away, the weather, their politics, disasters. Until it spills over into our own lives.

A friend of mine is up in Yellowstone right now and it’s been snowing. She’d asked me for advice on the best route home. Then she found out that one direction isn’t a possibility because the roads are still closed due to snow. I lived in Wyoming for over 20 years and already I’ve forgotten that early June can still mean snow there.

How quickly we adapt, focusing on our immediate world.

I think it’s easy to fall into this pattern, thinking that how things are for us is how they are for everyone.

Maggie Stiefvater, who is a very successful author of young adult novels, and at quite a young age herself, wrote a blog post the other day that kind of took me aback. I agree that jealousy is a worthless emotion and something to be overcome. However, the relentlessly self-congratulatory tone is a bit off-putting to me. It can be a trap, I think, to believe that your own success is a direct result of your awesomeness.

Clearly, if the juice is lacking, you have little to go on. Still, success in any endeavor is made up of many factors. Timing, serendipity, personalities. It’s like wondering why one woman is able to have babies easily while another is infertile. Is it because fertile woman is a better person? Because she deserves it? Why does one guy develop pancreatic cancer and another live to be 106? We like to try to trace cause and effect, but there isn’t always one.

With producing art, we’re talking about something that necessarily grows out of the deepest parts of ourselves. Sure, a writer can try to target what sells, but if the story isn’t genuine to her in some way, it’s not going to work. Not everyone has the story that becomes a phenomenon. That’s just how it is.

We all follow different paths in life. Our joys and sorrows, failures and successes are part of that. In the end, it doesn’t really matter what hand we’re dealt, but rather how we play it.

I sometimes wonder if I’d take Jane Austen’s lot – to be so revered long after my death and never get to enjoy it myself.

Maybe so. Hubris is a poisonous thing. Not getting too excited about one’s own awesomeness can be dodging a bullet. Hard to control a raging ego, once its been overfed.

More and more I’ve come to believe the real test in life is not how well we do, but how we handle what happens.

Remembering that not everyone sees the same thing when they look out the window is part of that.

2 Replies to “On Fires and Hubris”