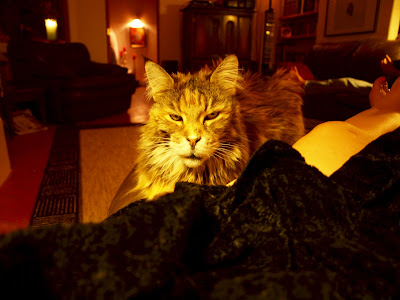 This is my partner cat, Teddy. Lately she’s taken to snoozing just next to me while I read at night. She also stares, but I think that’s love and not necessarily plotting my demise.

Sometimes the world of social media gets pretty amusing. Amusing in that “I have to laugh or I’ll claw my eyes out” kind of way. A lot of people offer advice. Usually the same advice, over and over. xkcd, one of my very favorite comics these days, had a strip recently along these lines.

This is more true than I think many people want to believe. There’s a nagging sense that most of the people who offer advice on maximizing social media don’t do much else with their days.

And a lot of their advice just isn’t very good.

For example, there is someone out there somewhere telling people that they should DM (direct message) new followers on Twitter and say hello or what have you. No no no! This is akin to being introduced to someone at a cocktail party, shaking their hand and having them yank you into an embrace, kiss you on the cheek and whisper about their website in your ear.

Few things on Twitter are ickier than following someone new – okay, give them a whirl, see what they have to say – and boom! getting a private message from them. Whoever out there is saying this is a good idea? It’s just…not.

The other bit of advice floating around is that a blog should be specific, focused and informative. Okay, this is not such a bad thing in and of itself. But we’re living in the Billion-Blog Ear. Yes, I made that up – snazzy, yes? No? Ah, well. It’s nearly impossible to start a blog with a new concept. Really the only thing a new blogger has to offer that isn’t already out there is themselves. But no, the Advice-Givers say that you must trumpet your new blog as filling some unmet need.

Thus, those of us on email loops, etc., are forever receiving posts that say “I’m starting a new blog that brings you the latest news in amphibian cancers!” Or “I’m starting a blog that chronicles my journey through retail hell.”

Actually, those two sound kind of interesting. Most of the notices I see involve writing and there’s just only so much you can say there.

So, in a fit of aggravation, rather than claw my eyes out, I threw this out on Twitter. I asked people how they would finish the sentence. Some of the best responses:

I’m starting a blog that…

…chronicles the minute-by-minute reactions of my cat to the royal wedding…and bacon. @theAntiM
…talks about the political ramifications of bacon. @Allison_Pang
…is nothing but randomness. @MichelleMiles
…celebrates bearded men everywhere. @pennyromance
…should have more zombies! @SullivanMcPig

Poor Sullivan has only cloven hooves and so his owner must blog for him. She tends to edit the zombie bits. So, for a bit of Friday Fun – any to add? What is the blog that Must Be Done?

(If my blog comment function hates you, email me at Jeffe at JeffeKennedy dot com and I’ll paste it in for you.)