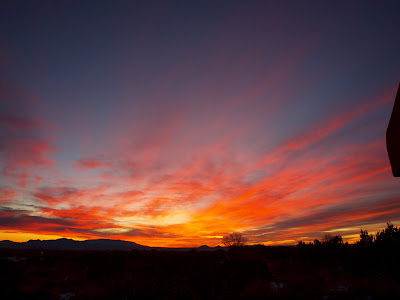 This is the same sunset that I posted a picture of on Tuesday. I took the two photos only minutes apart, but with different lenses.

I would say that I was being a good kitty and practicing to see what different lenses would do, but in truth, I forgot the telephoto lens was on there instead of the broader landscape lens. Some of the difference is that the telephoto lens focused in on a smaller part of the sky. But you can also see that the longer focal length (shorter focal length? My college physics professor is shaking his head) changes the perspective so that different shapes and colors predominate.

It’s common advice these days to always obtain a second opinion on medical diagnoses. In fact, articles recommend that, if your doctor doesn’t like the idea of you getting a second opinion, then that’s a big red flag. Patients can be misdiagnosed 25 to 50% of the time, depending on whose numbers you look at. Is this because 25 to to 50% of doctors are idiots? Well… Okay, no no no, it’s not. It’s because everyone brings a different lens to the table. Where one person sees the whole sky, another sees just one peak against a wash of crimson.

This is why having a writing group or multiple critique partners can be very important. It’s not that half of them could be flat wrong. (Well, depends on the CP, eh?) It’s more that each reader sees the story through a different lens. What’s a glaring problem to one, another breezes right past. It’s important to carefully consider the feedback a reader gives you, just as you would a medical diagnosis, but it’s equally important to evaluate it in context of how other readers see it.

I was in a writers group for many years where one member would change every single thing anyone criticized about her story. We worked mainly short stories and essays in that group, so the revision process was fairly fast. She brought the same story back to the group several times, looking for that perfect, thumbs-up moment. Finally, on somewhere around the fourth time she brought it to the group, someone pointed out that, as a critique group, someone would always find something for her to fix. This idea she had in her head that at some point we would declare it scintillatingly perfect would never occur. That only she could decide when it was done.

In the end, only one perspective is the definitive one: whichever sings to you.