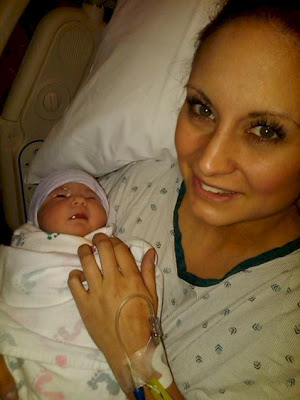 She’s actually my second grandchild, as her brother, Tobiah, turned two this summer. Their dad, Damion, has gorgeous eyes, too, so I expect both kids will be heartbreakers.

It’s funny how many people don’t know I have stepchildren. I look young for my age anyway, due to good genes, a long-term skin care program and a happy life. But I also acquired my stepchildren young. I was twenty-four when I met David twenty years ago. At that time Lauren was six and her brother, Mike, was eight.

So they could have been mine biologically, too, if I’d gotten started early. One of Lauren’s best friends had a baby at sixteen, so she’ll be on my same track.

It seemed David and I were always out of step with the other parents. Most of them were older than we were – or maybe they just seemed older. I was still in grad school. David had gone to college late and was in the early years of a new career. Neither of us had any money. We lived in a tiny apartment, with a grocery budget of $50/week, and Mike and Lauren stayed with us every other weekend, all summer and visited once a week for dinner. Our friends always forgot we needed to either bring Mike and Lauren along or find a sitter when they threw impromptu parties on kid-weekends. None of our friends had children. And the parents of the kids’ friends seemed so much more fixed in life than we were.

By the time Mike and Lauren were older, that was when our friends started having kids. Many of my cohort, my high-school and college friends now have children who are around ten years old. Lauren had her first baby at twenty-four. The same age I became a stepmother, I pointed out to her. She seemed young for it, but then, so was I.

Am I young to be a grandmother? I suppose so. But I’m hearing people say 60 is the new 40, which means that 40 must be the new 20. By that measure, I acquired stepchildren when I was in grade school.

Age is a rapidly changing concept these days. People may not be living a lot longer, but they’re certainly more youthful for it. Here we are, twenty years later and David is back in school, training for a second career – or perhaps third, depending on how you look at it. Mike is back in David’s home town, doing the things David did in his twenties, before he went to college. Lauren has a son who is two years older than her new daughter, who was born the same weight as Lauren was.

It all cycles around. David and I are looking forward to spending time with Tobiah and Aerro (named for the snowboarder in last winter’s Olympics, if you were wondering. And Nicole is Lauren’s middle name) as they grow up. We have more room and more money now.

And we’re still young. Doesn’t get any better than that.

Welcome to the world, Aerro. We love you.