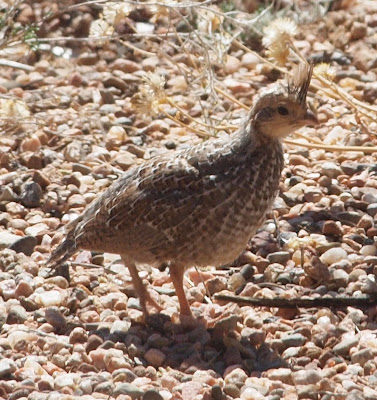 See? Even if sunset wins out one day, there’s always another opportunity for the baby quail.

They look so rumpled, compared to their sleek parents. But in time they’ll work out the fuzzies and be more styling.

A question that seems to make the rounds of the genre writers loops from time to time regards how important grammar really is. Editors and agents will sometimes exhort querying writers to get their grammar, spelling, and punctuation straight before submitting a manuscript.

Yeah, I know. It seems self-evident.

But the genre writers frequently regard themselves more as storytellers than purveyors of the craft of writing. Unfortunately, this kind of attitude only adds to the sometimes deserved, sometimes not, reputation genre fiction has gained of being entertaining, but terribly written.

Sometimes the authors put it in terms of, which is more important, grammar or voice? Angela James, editor at Carina Press, Harlequin’s digital imprint, answered this question on her blog a little while ago. For some reason, it’s just now eliciting discussion on the email loops.

Quite indignant discussion, too.

It’s as if people have finally discovered that they *were* supposed to learn all those silly grammar rules in grade school and that there is real life application for them after all. Especially if one is, erm, trying to make a professional career out of it. By throwing “voice” into the argument, an author is trying to make the bid that the creative aspect is more important.

Of course the individual creativity a writer brings to her story is important, but without a solid foundation, art is simply a heap of stuff.

You don’t hear architects complaining that they shouldn’t have to learn structural engineering and the laws of physics, because the creativity they bring to design is more important. Even if the architect is only designing a pretty gazebo for the park instead of an office building, people still expect it not to fall down.

Musicians like to use discordant sounds from time to time, to create a particular feeling, whether it’s classical unease or a rock’n’roll wail – but the musician first must know how to play their instrument.

Painters like Picasso broke the rules. He messed with perspective, light, shadow and contrast to put a new spin on our way of seeing something. That was his art, his voice, as it were. It’s an unmistakable style. However, he spent his early years painting in a crisp, realistic way. He had to first know the rules before he could effectively break them.

People sometimes look at abstract paintings and say “my five-year old could have painted that.” A five-year old could possibly stumble upon something interesting, but only an accomplished artist can first, establish themselves in the community with the credentials of being able to paint well, and second, systematically break those rules in a way that opens our eyes.

To me, it’s key in all of these efforts is to know which rules you’re breaking and why. That makes it art and craft, not accident.

If the structure is good, then the voice shines through. Even if the voice uses a style that deliberately breaks grammar rules, that’s clear to the reader.

It just takes a bit of time and work to smooth out the rumpled bits. A mature writer who applies herself to learning craft will find she’ll gain an enviable sleek and smooth style.

7 Replies to “You Mean, My 3rd Grade Teacher Was Right??”