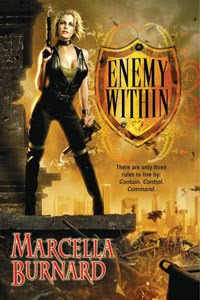 The countdown has begun.

RT Book Reviews gave Enemy Within 4.5 stars and called the book a top pick. Unfortunately they won’t let you look at the review itself unless you have a subscription.

But let me liberally quote from the text:

“Burnard does a stellar job with the action and pacing…”

“[the genre] just got a major infusion of talent!”

Marcella is laboring under a deadline to finish revisions to the sequel, Enemy Games, so I get to be the bearer of this great news today. Since Marcella’s not available, I can provide some little-known trivia:

No, the plot is not the same as the Star Trek episode where Kirk gets split in the transporter. This was actually the first question I asked Marcella when she told me the title of her book. She frantically looked up the episode and reported back in relief that her novel was nothing like that. She’d had no idea the title had been used before. Apparently not everyone memorized all the titles of the episodes in the original Star Trek series.

Instead it’s about this:

After a stint in an alien prison torpedoes her military career, Captain Ari Idylle has to wonder why she even bothered to survive. Stripped of her command and banished to her father’s scientific expedition to finish a PhD she doesn’t want, Ari never planned to languish quietly behind a desk. But when pirates commandeer her father’s ship, Ari once again becomes a prisoner.

Pirate leader Cullin Seaghdh may not be who he pretends to be but as far as Cullin is concerned, the same goes for Ari. Her past imprisonment puts her dead center in Cullin’s sights and if she hasn’t been brainwashed and returned as a spy, then he’s convinced she must be part of a traitorous alliance endangering billions of lives. Cullin can’t afford the desire she fires within him and he’ll stop at nothing, including destroying her, to uncover the truth.

Finally, Marcella said I could confirm the rumors that she posed for the cover. I’ve actually seen that outfit, as she wears it on her sailboat from time to time. She keeps the blasters locked up, however, so the cats won’t get into them.

And yes, she really is that stacked. 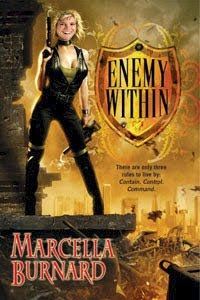 Here’s the draft cover from her modeling session before they retouched it.

8 Replies to “Best Seller Within”