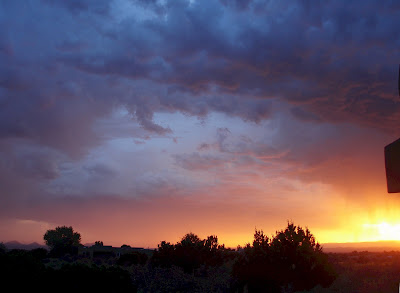 This weekend was hot.

Santa Fe broke the record high on Saturday by hitting 100. So, yeah, not so bad. And it’s a dry heat. Believe me – I lived in St. Louis for a while. Lack of humidity makes all the difference in the world.

We have nice cross-currents for air flow in our house and ceiling fans, so we never felt like we had to turn on the air conditioning. But we stayed pretty still. Even Isabel stayed inside. She’s gone from being the toddler-cat who has to be dragged in from playing, kicking and screaming, then immediately falling asleep, to teenager-cat. Friday night she spent the entire hot, still night in the garage hunting mice. Then on Saturday morning she slept in, got up to eat breakfast and went back to her kitty condo – the cat equivalent of partying all night and watching TV in the darkened den all day.

Then this storm rolled in, creating a dramatic sunset and dropping cooling rain. All of us parched people, animals and plants drank it gratefully.

I’m making steady progress on Sterling. Allison called me “quietly enthusiastic” about it. I said that’s because I’m trying not to be obnoxious. I never thought I’d be one to agree with the write-every-day thing. When I was first working at being a writer and attending every workshop I could, almost every singled writer gave that advice.

Write at the same time every day.

Some would shrug, apologize and say they knew it wasn’t easy, but that it was the only thing that worked for them.

I felt like that was impossible for me. At the time I was finishing my graduate thesis, working full time and taking and teaching martial arts classes most nights of the week. Even if I wrote every day, it couldn’t possibly be at the same time, because every day was different.

So I wrote when I could. Usually in sporadic chunks. I was writing essays then, so I could write an entire essay over the course of a few hours and that worked for me. My first publications came out of that time and my first book. We’d have to agree that worked just fine.

But other things still took precedence. Even gardening and quilting tended to edge out writing time. I would bemoan my lack of writing time, but there it was.

All that changed when I went to writing novels. Obviously I couldn’t bang out a novel in a few hours. I found I had to work incrementally, building the story piece by piece over the course of months, holding the ideas in my head over that time.

It took me nine months to write Obsidian. No, I didn’t work on it every day. I had several long stretches where I worked on it only a little or not at all. Sterling will take five months. And I’ve really only hit the smooth rhythm in the last two months.

But I do have to write every day. At pretty much the same time. Shockingly enough, it works. That approach also requires that the writing time is my core schedule and I work everything else in around that, even the day job (unless I just can’t make that happen, which can occur).

Some people draft faster, then revise. For me, when I’m done by mid-July, the novel will be reasonably polished.

And I keep thinking that it might be really good.

Which is this lovely bubbling feeling.