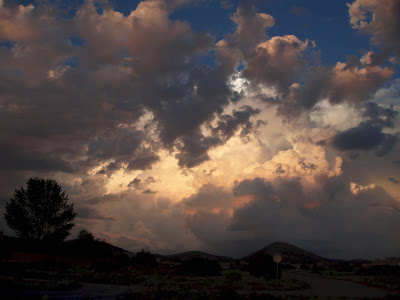 A bit of Spring sunset tumult from last night. As with many things, it brewed up to be a big deal, but really produced very little.

Allison and I were talking about self-absorption yesterday. Self-involvement. Narcissism.

These terms get tossed at writers quite often. And usually, I think, by the people who want the writer to be paying attention to them, rather than to what they’re writing. I ended up telling Allison that she’d been necessarily self-involved in completing her Revisions from Hell in record time.

Then I realized, that’s not true at all.

She hasn’t been self-involved; she’s been absorbed in her work. Writers drew the unlucky straw of doing an awful lot of their work in their heads, in dreamy states that are arguably other planes of existence. It tends to make them unavailable for paying attention to the people around them, which can lead to rancor.

Blogging and memoir-writing – often the same thing – are also targets for the self-involvement critics. “Navel-gazing” they love to call it. If that’s so, would going back and reading one’s own blog posts be navel-gazing at navel-gazing?

Once you produce the writing, it becomes something outside yourself. It’s art. A painting is not the artist’s self. A symphony is not the musician’s self. An elegant bit of code is not the programmer’s self. All of these things, to varying degrees, do reflect the person who created them.

It’s an interesting thing to me, as I’ve mentioned before here, to go back and read my older blog posts. I particularly like playing “this time, last year.” The May 27 post from last year is full of sadness about getting a “no” from the agent I really had set my hopes on. Quite a bit has changed for me in that time – my strategy, how I’m going about things.

What non-writers may not realize is, reading your own work rarely feels like a familiar thing. I’m often surprised by what I’ve written before. People have quoted my work to me and I failed to recognize it – which irritates them. I understand why it would, but it’s lovely that they’re quoting something I wrote. It just no longer sounds like a piece of me. It has its own life.

So, Allison, I take it back. You haven’t been self-involved at all. You’ve been involved in your book.

And that’s an admirable thing.