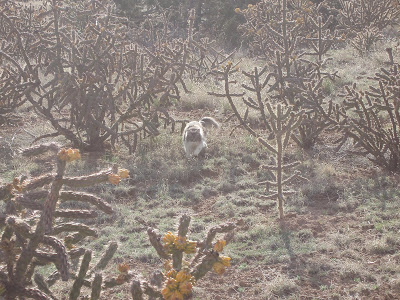 When we awoke this morning, Isabel greeted us with a series of excited chirping meows and significant looks at the big leather armchair. This can mean only one thing.

She caught a mouse. Oh, and it had escaped, by the way, and she needed help moving the chair.

Good morning to you, too.

See, in this new house, we’re on all one level with no basement, no cellar, no crawlspace. Thus, none of my typical kitty box locations. So, David installed an insulated kitty door in the human door to the garage and I stuck the boxes out there. This makes for great nocturnal fun, what with chasing mice in the garage all night.

Then bringing them into the house.

Teddy was interested, too, but in a more academic way, since it was Isabel’s prize. We lifted the chair, Isabel nabbed the mouse, David took it from her and released it back to the wild. Now Isabel is back in the garage, looking for more.

I had lunch with one of my Boston colleagues yesterday and we talked about how people feel about their jobs. She feels disheartened at times, she said, working with people who seem to care more about what time they get to go home than about the work itself. That their jobs seem to be entirely about working their flex schedules than what they’re trying to accomplish. Worse, despite their focus on getting away from the job, some seem to not have any particular passion outside of it, either.

We’re at a funny place with our company, so it’s on her mind, what the ideal career would be. Projects are getting canceled; people are shifting around. In some ways, what project we move to is governed entirely by where the money is. But we were asking each other what we’d like to be working on anyway.

She knows I want to be a full-time writer, of course, but she wondered what in the company I’d most like to be doing. To some extent, I don’t care so much. The project I worked on for so long was one I fell into. I became an expert on the subject, but not out of any kind of passion. I like learning new fields, so really any project will do for that. I finally said I wished the company would use me more as a writer. I think it’s foolish that they don’t, but there it is.

When I returned the question to her, she said she really didn’t know. She didn’t know in college; she didn’t know when she got her Masters in International Relations, an admittedly vague field. I asked her what she’d envisioned and she thought maybe working for an NGO (non-government organization) or something.

“Yes,” she laughed, shaking her head. “That’s it – something noble.”

The question of what we all do with ourselves has a unique answer for each of us. Some of us have day jobs of varying interest to pay the bills while we indulge our true passions in slices on either side of the work day. Some of us work at whatever and live for our families. Others of us live for our careers and care for nothing else.

I think what my colleague is getting at is that she’d like to be doing something that contributes to the betterment of the world. The exact method isn’t important to her. I think that’s part of why many of us write, with the idea of giving back stories to the world.

But really, in the end, most of the things we choose to do, we do because we like doing it. Whether that’s having a job that lets you leave at 3:30 so you can pick up the kids, or having a job that gives you a thrill that you’ve saved a life.

Many writers note that the business end of it is no fun at all. I might have a noble idea of sharing my stories with the world, but the real reason I do is because I like to.

Isabel isn’t catching mice to rid our garage of rodents. She does it because it’s fun.

3 Replies to “A Noble Effort”