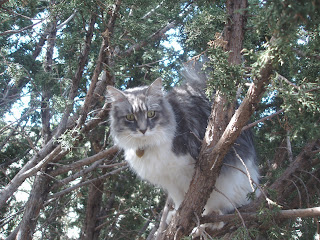 Yesterday Isabel discovered the finch nest in the juniper out front. She managed to climb pretty high before I intervened.

For the finch’s sake, not hers.

It’s pretty cliché, the story about a cat being stuck up a tree. They can climb up, but they can’t come down again. The idea makes a good foil. The hero rescuing the cat, the fretting over the cat, the dubious moral about getting yourself into something you can’t get out of.

The truth is, usually the cat doesn’t come down because it doesn’t want to. When it’s ready, down they climb, just fine.

I’ve had enough of hanging out in my particular tree. I’ve taken what feels like a big step and I’m sending directly to a science fiction/fantasy house. One whose imprint I know like my own name, because it’s been on every book I’ve read for the last 4o years or so.

It feels good, too. 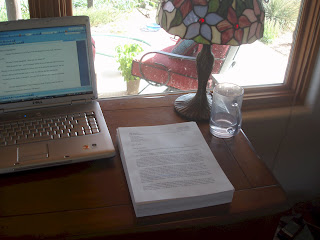 As I discovered a few months ago, printing the book out is satisfying in a way the electronic attachment can never be. Mindful of those lessons, I used my best paper. This house earned extra points from me because all they want is a cover letter and the full manuscript. No dinking around with synopses or partials. All or nothing baby.

I sent it all.

And it feels like taking action in a way that nothing else lately really has.

And I tweeted the fabulous Robin McKinley to tell her I was sending it, not that she’d care, and that my cover letter says I want to be her when I grown up, so I was tweeting her for luck. And she tweeted back a “Good Luck!” Which, okay, is probably silly to get all thrilled about, but I did. I am.

Now we wait and see. I bet the cat will come down on her own.

3 Replies to “Taking the Leap”