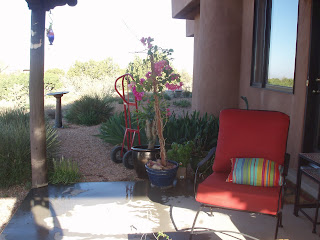 This morning I moved the houseplants outside to start the hardening off process.

I noticed in my wisteria-love fest the other day that last year in Laramie I moved the plants out on May 28. (I explained hardening off there, too, if you’re wondering what it is.) So Santa Fe has only moved me up by 16 days. Of course, we’ve been gone and I didn’t want the house-sitter to have to nurse them. I might have done it sooner than this.

We’ll see what next year brings. By all accounts it’s been a cool Spring all up and down the Rocky Mountain states.

But it’s snowing in Denver and Laramie, so I have plenty of smug to fill my bowl of contentment.

I talked to Catherine Asaro yesterday on the phone, about Obsidian, which she graciously read for me. She’s really a wonderful gal and a terrific writer, so if you haven’t read her, you should seriously pick up a book or two of hers. And I’m not just saying that because she read my mss and said lovely things about it.

So, while it was great to hear her tell me what a wonderful writer I am and how good the book is, there’s no super-new news there. She thinks I’m not going to get an agent with it because it’s too outside the box. She says that’s what I get for forging a new path. Which sounds kind of cool and glamorous, except that it really means that it’s difficult to sell.

“It starts out as excellent, gritty urban fantasy,” she says, “then moves into also excellent fantasy. But from a feminine perspective, which is really different.”

One of the things I’ve learned? When all those publishing industry folks say they’re looking for something really fresh and original, they’re not, really. What they want is the same creature dressed up in a fresh, new outfit.

Actually, I’m not feeling bitter at all. Catherine says pitch directly to editors because I’ll surely find one who wants this. So that’s what I’ll do. I’ll keep working on Sterling, too, which (as I think I’ve mentioned twenty times or so) should fit quite neatly into urban fantasy, with no genre-defying cross-overs.

That always seems to be my deal – I do stuff that nobody gets, then five years later it’s the thing. It would be nice to think I’m cutting-edge, but really that seems to be someone else most of the time. Suddenly my thing that no one got is all the rage or even old hat.

I could give you a bunch of examples, but they’re boring. I swear it’s true.

When Catherine said that forging a new path is difficult, I pictured myself in a blizzard, struggling through knee-deep snow. Too dramatic? That’s how it feels. Ice pellets of rejection stinging your face, energy seeping out of your muscles until you feel like you’re simply too tired to go on.

But what’s the alternative? The literary equivalent of lying down in the snow to die. It would feel nice, I hear, the cold changing to warmth as hypothermia sets in. Yielding to the overwhelming sleepiness as the falling snowflakes bury you. Erasing you.