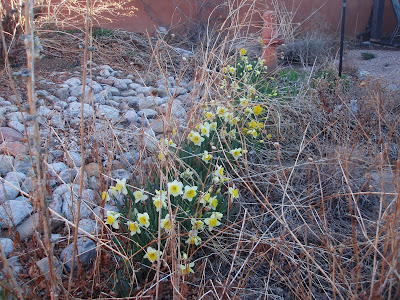 A conscientious gardener woudl have long since cleaned this up. It’s on the To Do list for Sunday. Ask me next week where the picture is of the cleaned-up pretty.

Remember how I mentioned that last weekend I got involved with Sterling and didn’t do any of chores?

Well, this was one of them.

It’s not always easy, balancing home life with writing life with career life. I remember growing up in the 70s amid the extensive conversations about “Superwoman” – the liberated woman’s answer to having it all and whether it really could be done. Women were trying to be mothers, housewives and career women, all while never letting him forget he’s a man. Of course, much of the pain came from the stretching of traditional roles – the obvious answer to women was for the men to do more with the kids and the house. Which many of them started to do. Some don’t, but that’s not what I’m here to talk about.

When a person is a writer, until you’re paid enough to write full-time, you essentially have a second unpaid career. Or a second career that pays beans. It’s like moonlighting at some crummy job with lousy hours, but not for the extra money. Okay, not a crummy job, a fabulous job. But the hours still suck, you’re forever interviewing and you don’t even get minimum wage.

A writer friend of mine was “outed” at her day job yesterday. It took her by surprise.

She writes romance novels, sexy ones. Turns out someone at her old job mentioned it to someone at her new job (manly gossip?) and the older male manager at the new job did a little bit of internet searching and found her ebooks…

He told her he thought it was just fine.

Yeah, it’s weird and uncomfortable. She feels exposed in a way she didn’t expect. And no, she doesn’t use a pen name, so she wasn’t trying to hide her superhero novelist identity. Somehow she thought the two worlds would never mix. Now they are.

I should also mention that she’s a single mom (though she’s now engaged a terrific new guy). She’s been handling all of it very well for a very long time. She’s still working at breaking into the mainstream publishers, where she could maybe make enough money that she’d have only one career to balance with all of the other jobs.

It doesn’t help that romance is a snicker-generating genre. If she’d been outed as a mystery writer, she’d have more cache. I can see why she’s bothered – it’s like she’s now a dirty girl.

Hopefully, that was the last of it. The manager told her he knew (bum dum dum!) and that he’s fine with it. Maybe she can get away with just doing the job she’s really good at and won’t get any grief for the work she loves to do on the side.

Maybe I’ll get my house and garden cleaned up this weekend.

6 Replies to “Having It All”