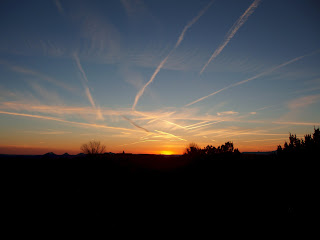 LaTessa commented on my Spring Snow post that she’d recently flown over New Mexico — on her way from Memphis to Vegas.

(Of course, her main point was that she couldn’t figure out what all the white stuff on the ground was, but we won’t go there. The woman is stressed and suffers from various delusions. We all just look the other way.)

But I think a lot of people fly over northern New Mexico. The contrails at sunset are spectacular. This is a bit like noting that increased pollution makes sunsets more dramatic, and that a nuclear blast would REALLY liven up the skies. It makes for a happier life to just enjoy the pretty. Whether the condensation trails from airplanes have a serious impact on global climate change is just one more thing I can’t think about. I’m already scrutinizing all of my plastics to see if the (frequently illegible) number on the bottom makes it recyclable or not.

It makes sense, though that there are so many planes flying over our piece of the world — we are on a direct route to Las Vegas and most of southern California, as well as Mexico to all points northerly. There’s a phrase, even – “the flyover states” – coined by the people who fly from, say, New York City to Los Angeles. Oh yes, it’s a a term of contempt, lumping together all the people who don’t live in the major, urban coastal cities and who therefore develop unsophisticated ideas.

It doesn’t help that there are a lot of people in those states with poorly reasoned ideas. Not that there aren’t a few in those coastal, urban centers, too.

It’s easy to fly over and forget what the experience on the ground is like. We forget that other people’s lives aren’t exactly like our own. We might know it, in our heads, but our hearts forget. We get caught up in the tumult of our own lives, the daily concerns, sorting the plastic recyclables, admire the sunset and hope the contrails aren’t really such a bad thing.

Every once in a while, we notice that someone else has snow.

One Reply to “Flyover”