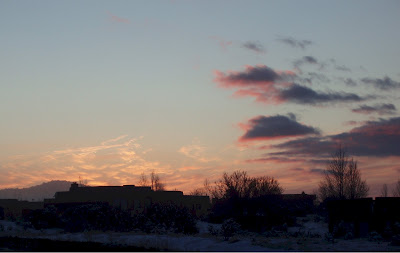 Kind of a playful sunrise, with all the little swirlies.

It’s the common wisdom that the young of all species learn through play. Right? We know this. Kids play house and doctor. They play war and cops & robbers. You can watch kittens stalk imaginary prey. Puppies nip and wrestle for dominance. All of the developmental types love to do studies on this: how play develops the mental and physical structure we need to be effective in the world.

For the next week, I’m going to play Full-Time Writer.

Believe me, this is the funnest game ever! I hope so, anyway.

Things are slow at work. Predictably slow. as we’re in the doldrums between the crashing waves of last year’s projects winding up and just before the long voyage that will be this year’s projects. One advantage of my super-busyness last Fall is I’ve got a fair amount of vacation and unused holidays built up. Our company is really great that way — you can work on a holiday if you’re pressed and save it for another time.

This is that time. 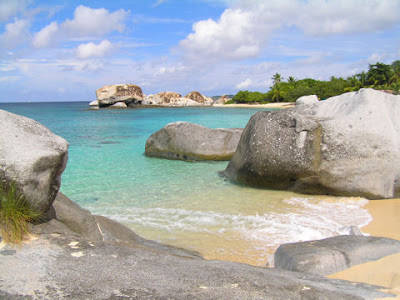 Don’t worry — I’ll go on real vacation later this Spring, when David gets his two-week break from school and we’ll go to VIRGIN GORDA! Did I mention we’re going to VIRGIN GORDA?? Well, we are. (Thanks to Guavaberry Spring Bay for the pic!)

But for now, I want to use the uninterrupted time to get the scaffolding up on the new novel I’ve been noodling on. I need to think up a way to refer to it. I don’t really have a title. I know how *I* think of it, but I don’t want to put it out there in the world just yet. I’m feeling protective of her young and tender self. And you know I hate the term “WIP.”

Hell, I guess it’ll just have to be New Novel.

Once I did a writers retreat, at Ucross Foundation. An incredible experience that went a long way toward making me feel like a “real” writer in my early days. For two solid weeks I had a room, a writing studio and an actual staff that fed me. (And some other artists, too.) At midday they would creep up and leave a gourmet sack lunch outside your studio door, so they wouldn’t disturb the incredibly important work going on inside.

Of course, being a writer, I would long for the interruption. Listening for the lunch elves so I could quit agonizing and have a legitimate reason to stop writing. I don’t know what it is about writing that, once you have large blocks of time to do it, it becomes overwhelming. But, over the two weeks, I got better at it. There was no clock in my room and I didn’t bring one, so I tended to wake when the sun hit my pillow, around 7. The only scheduled event in my day was dinner with the other artists every night.

When I returned, a friend asked me if I’d found my “perfect calendar.” After a moment of thought, I said yes. Yes, that was a perfect schedule for me.

I’ve done the “at home” writers retreat once or twice before. But at those times, my writing habits were less solidified and my life was crazier. I ended up spending that time writing very little and napping a lot. Or catching up on other stuff.

This time though, I want to really test out what it’s like. I want to set up my perfect calendar as a full-time writer and practice for when it’s real.

I’ll let you know how it goes.