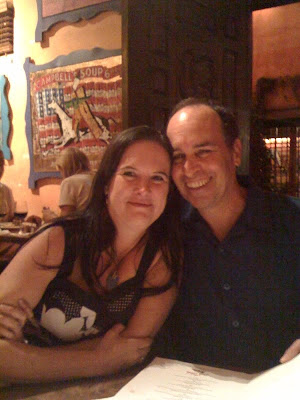 Yesterday was our anniversary — 19 years now.

And yes, I’d planned this blog post for yesterday, but I had an early meeting in downtown Santa Fe that expanded ever outwards and kept me there until 4:30.

So, January 27 for us, which was Superbowl Sunday back in 1991. It’s hard for me to see how nearly twenty years have gone by, how it’s possible that the 90s aren’t recent years.

I’m very lucky to have found him and spent these years together.

The night before last, we watched Ghosts of Girlfriends Past. I love that David doesn’t complain about watching movies like that with me. Of course, anything with some comedy and lots of pretty women is generally good for him.

I recall a few years back, David went hunting with a divorced bachelor friend. They were up in the mountains for a week, doing the guy thing and came back all scruffy and pleased with themselves. We saw on the patio in the warm Autumn sunshine and they told me about the week. The friend said that he was amazed that I didn’t pitch a fit about David taking off for a week like his ex-wife would have. And how, when he’d mentioned it to David, he’d said “I do what I want to.” I expressed surprise that anyone would think I’d try to stop David from doing something he enjoyed. (Besides, a week to myself to write? Sign me up!) Then David asked me what I wanted to do that night and I said “Oh! Wimbledon is at the movie theater — Paul Bettany! I want to see that.” David said okay and the friend starting laughing, slapping his knee. “Oh yeah!” he says, “you do what you want, all right.”

And, I thought, you just don’t get it.

After Ghosts of Girlfriends Past was over, we sat and sipped some brandy and talked about love. This is another thing I love about David. We talked about the theme in the movie — and this is a Spoiler Alert, if it’s possible to spoil a plot as pat as that one — that somehow the childhood love is purer and more meant to be than any other. Which I just don’t buy. I don’t like it in romance novels, the instant mate bond/fated love kind of thing. I much prefer when strangers come together, have to learn each other, have to learn to accommodate each other and earn the love.

David told me that Osho, one of his current favorites, says that the sensation of falling in love, of the irresistible passion, the Meant for Each Other, instant mate bond kind of thing is all unconscious. That people should aspire to upward love, which is about conscious choice.

When people ask me our “secret,” our special formula for our happy relationship, this is what I want to explain to them. It’s about being happy doing what makes the other person happy. It’s about making conscious choices to be together and enjoy each other.