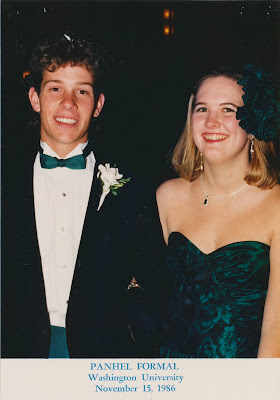 We were to replace our profile pics with ones from when we were younger. My problem is, I haven’t scanned in any of my old photos and the ones I used to have out are boxed up. Not from moving laziness, but on purpose. We like the clean walls of this house. And, with the way the views fill the rooms, it doesn’t look right to have too much stuff inside competing.

So I was judicious in what I’ve hung up and put out. Those old family pics from when I was a kid? Eh. In the archives.

But one of my sorority sisters has been clever enough to scan in some of our old photos and sent me some.

So now I’m cruising on nostalgia. That guy in the photo was my Great Passion. Fantastic lover, stand-up comic and alcoholic. He broke my heart twice. I have a long-standing rule of never getting back together with someone after the break-up. I firmly believe that whatever caused you to break up in the first place will still be there. He’s the only one I violated the rule for and, guess what?

I suppose sometimes you have to test your own rules, to verify the truth of them.

He’s since fallen off the face of the earth. I sometimes wonder if he’s self-destructed. There’s another one I wonder about sometimes. Another passionate and dysfunctional relationship. Must be a theme.

I remember when a counselor told my mother “we seldom marry our great passions.” Which I think is true. The men who give us the roller-coaster ride of passion are not usually the men who are good for the day-in/day-out routine of grocery shopping and alarm-setting.

While I know romance novels are about the fantasy, this aspect sometimes bothers me. When the relationship is SO turbulent, romantic and passionate, I sometimes get hung up on whether the happily-ever-after will stick. For me, I really need to believe in the reality of the story, to really enjoy the fantasy.

Funny — when I started this post, I didn’t intend to converge with Allison’s post today, though I did read it while writing this, and while chatting with her on IM. Interesting how the mind works that way. Of course, she also had to point out that she was in 6th grade when this photo was taken. Which just means she was a snot-nosed brat when I was a sophisticated young woman.

That’s the other thing I’ve learned from nostalgia: it’s easy to look back and think how young and pretty I was then. Something I didn’t know. I didn’t think I was, at all. It’s another way to bend what’s real, our perceptions of ourselves. Now I just try to appreciate how I look, since I know I’ll look back later and wonder why I worried that I was too fat or too pimply or what have you.

Maybe part of the trick is embracing reality for what it offers. David cooks dinner most nights and is a lover to me in a way only someone you’ve been with for almost twenty years can be. When I have early meetings, he brews Earl Grey for me and puts in in my favorite thermos.

It might not make for the stuff of novels, but it is truly romantic.