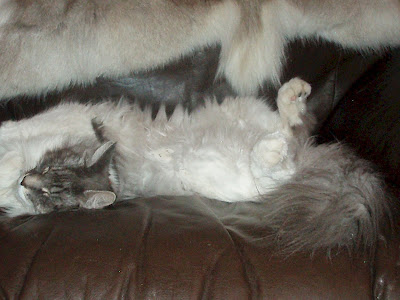 I’ve never had a cat before who curls her toes.

Isabel curls even her back toes, when she’s especially deliciously at rest. If you pet her in this mode, she’ll purr and flex her toes, then curl them tighter.

She makes it look enviable.

I’ve always been a good sleeper. David says that if the house burned down, he’d have to carry me out over his shoulder. Indeed, when I was a girl, the house across the way, outside my bedroom windown, burned down, complete with excited neighbors and screaming fire engines.

I slept through it all.

But in the last few years, I’ve developed this weird sleep thing. I’m actually not sure when it started. At first it felt like a kind of anxiety. I would worry at night about where my rings were. Why my rings, I don’t know. I wouldn’t even wake up, really — just fret in this kind of limbo state about them. And no, they’re not incredibly valuable rings, nor have I ever lost them. I have lost other jewelry, and it bothered me greatly, so I suspect that’s where the fear comes from.

The point is, though, that it doesn’t matter what the object is, it’s the emotion that troubles my sleep.

I put it down to stress, though it doesn’t always seem to happen when I feel most stressed. It waxes and wanes, occurs in little clusters. Over time, the object of my concern has changed. (Possibly because I keep telling myself to quit thinking about the damn rings.) It some ways, it has expanded to involve some incredibly important object that I’ve left in a hotel room drawer (yeah — there’s my business traveler anxiety) and, since last fall, a cat that I’ve contrived to forget about and leave to die somewhere.

I can even see it: a grey, tiger-striped short haired cat. Unlike one I’ve ever owned.

In fact, I spent time thinking about this. I’m a writer. I tend to be dreamy, to read in omens and signs. Who is this cat? What does the puzzle-box mean? Is it some deep meaning about my inner self? Some part of me neglected, locked away? Am I really a were-cat and I’m going to Fight Clubs at night while I think I’m sleeping?

It happened again a couple of weeks ago and, for the first time, David was there to witness the whole thing. I had been asleep for about half-an-hour and he was still lying awake. (Recall I’m the girl who’s out the moment her head hits the pillow.) I sat bolt upright, thinking the grey tiger cat was out being chased by coyotes. I’m always deeply confused in these moments, if you hadn’t gotten that already. Not sure where I am, even who I am.

I was struggling to remember how many cats we have and why I thought there was one missing, when David stroked my back and said everything is okay.

“I thought we had a kitty outside,” I tried to explain.

“Both kitties are happily walking around inside,” he told me. And he rubbed my back until I laid back down and, of course, went instantly back to sleep.

In the morning he told me that he’d been listening to my breathing and that I’d been really deeply asleep and then stopped breathing. He was on the verge of waking me up when I sat up.

So, now I’m thinking it’s some kind of sleep apnea. Which means the waking up is a healthy thing and the formless (and formed) anxiety might be related to that.

Now I’m just watching it for that. Fortunately, I’m not one of those several or hundreds of times a night people.

4 Replies to “Dream a Little Dream of Me”