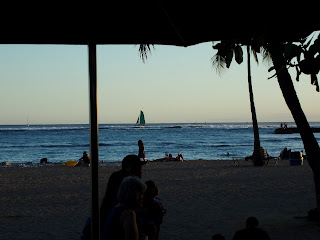 Okay, okay — as several of you have noted, I dropped the ball.

It’s been a week since I posted. I am truly remorseful. I promise.

(Maybe not so much — it was a hell of a week on several levels.)

So, here’s the recap, montage-style. Here, you can play the fast-paced Hawaii-5-0 theme song for background, if you like. 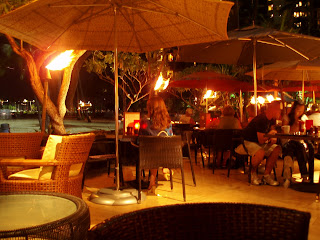 4th of July was spent in the Tropics beach bar. Many sail boats. More Tiki torches. Have to admit: I have a real thing for Tiki torches now. 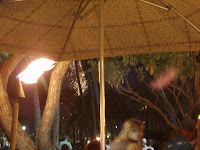 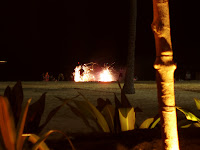 Fireworks over Ala Moana park were fab, especially from our table. And there was drunken fun. Followed by amateur beach fireworks. Hard to capture with the camera, but oh-so-fun to try! 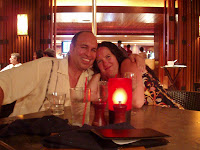 Sunday we spent on the North Shore: Waimea Bay was gorgeous beyond belief. What happened was, parking was awful, so we parked around the bend 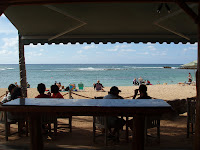 at the Catholic Church. And no, this wasn’t Bad & Wrong because the youth group CHARGED for parking as a fund raiser. Screw the car wash thing — charge the tourists $5 to park. We loved it. And besides, we then didn’t worry about leaving our valuables in the trunk. Upshot is? Camera and purse were in the trunk, so if you want to see beautiful Waimea bay, you have to go yourself. Or look up one of the undoubtedly millions of other pics out there. But here’s one of the beach bar at Turtle Bay.

Yes, there is a theme. 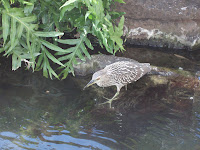 Then I went to work. And David played. With the local herons, koi and seahorses. I know. Don’t ask. 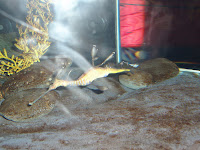 And then, Tuesday after work, I went swimming and it was the straw on the camel’s back of two days of non-stop snorkeling and beach-walking.

It rebelled and I was sad.

The “now I can’t walk much at all” kind of sad. 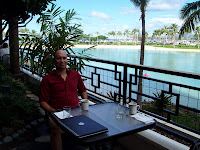 But we managed to make it to some great restaurants: The Ocean, House Without a Key, Go Mate, Cheeseburgers, Seafood Paradiso, Roy’s. And our breakfast spot on the lagoon. Included just because Marin agrees that “lagoon” is a great word.

Overall, it was wonderful. We worked hard. (Not David. Or Joe. In fact, the valets got quite a kick out of them loading Val, Laurie and I into the car for the workday and waving goodbye.)

But when you have a view of Diamondhead, somehow it’s not quite so bad. 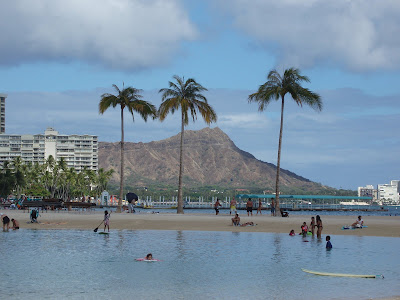 2 Replies to “Hawaii: The Recap”