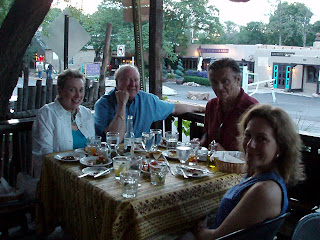 So, this is funny.
Not the picture. At least, I don’t mean it to be.
This is just a picture of a dinner party on the porch at El Ferol in Santa Fe. In the somewhat shadowy foreground is Laurie, friend and boss, who you might recognize from a previous post. Across the table, facing us, are Annie and Alton. And next to them is Jan’s ex-husband, Fred.
This is how it worked: my mom has long been friends with Jean Galloway, neighbor and Channel 9 supergal now off doing her own consulting thing. When Jean’s sorority sister, Jan, got divorced from Fred (yes, the one in this picture), Jan moved to Denver to be near Jean and several other Delta Gammas from their chapter. Annie, though she now lives in Houston (and summers in Santa Fe) is also their friend from way back. (I’ve never quite pinned down if Annie is a DG, too — ah, my mother confirms that she is.) So, via the transitive property of friendship, my mom and her husband, Dave, are now good friends with Annie and her husband, Alton. And they, being truly lovely people, invited me to meet for dinner while I was in Santa Fe.
Now, normally I would never do this.
But when Kim and Val flaked on going out to dinnner, I called up Annie and asked if Laurie could come, too. Actually, first I called my mother (I know — I’m 42, what’s your point?) to ask if SHE thought Annie would be offended if I asked if Laurie could come along. I thought not, as that whole social group is pretty much “the more the merrier.” My mom confirmed this and assured me that Annie & Alton would also let us split the bill by throwing a couple of credit cards on the plate.
I call Annie. Of course she’s delighted for Laurie to join us. In fact, Fred (Jan’s ex, you may recall, who I’d never before met), was passing through Santa Fe on his way back to Denver (yes, he moved there after Jan did, but no, there was no reconciliation) after visiting their daughter, Becky, who is my age and who I’ve known for something like 25 years, in Scottsdale. And Fred was also joining us for dinner. Turns out that my mom’s Dave accurately predicted that we would no longer be allowed to chip in on the tab once Fred was in the mix.
And so it went. Lovely warm evening. Delicious tapas. Really yummy margaritas with an unpronounceable kind of tequila (Maluchachas? Something like that?). Delightful company. Annie & Alton picked up the tab. No protesting allowed.
So Laurie and I decided we have to send them a gift. Laurie decides to sic HER mother on the task, because her mother, in Kentucky, has entree to a certain something we happen to know A&A really like. (Can’t reveal more here, in case Annie reads this blog post.) Laurie’s mother scores! She’s so excited with her find that she insists on wrapping, packaging and mailing the gift to Annie and Alton herself.
Worse, she won’t tell Laurie how much it was. She tells Laurie that she’s just so pleased that Laurie had remembered her manners and thought to send a gift in this circumstance, that she doesn’t want us to pay her back. Yes, Laurie is older than I am.
We figure we now owe LAURIE’S mother a present.
My mother only commented that we’ll always be their little girls and to give it up.