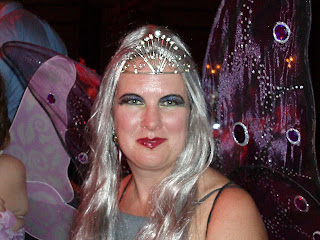 The RT Booklovers Convention has been a total whirlwind.

So much so that I (obviously) haven’t been posting the last few days. RT is a different kind of writer’s gig because there are so many readers and booksellers here. Their enthusiastic presence mitigates the usual stalk-and-duck waltz between the editors/agents and the authors aspiring to be published, or just published better. The e-publishers like Ellora’s Cave, Cerriddwen, Samhain and Loose Id are very well represented here. Lots of promotional parties. Tons of shmoozing.
And, of course, a fairy ball. After all, how often you do get to dress up as a fairy for a professional convention?
There’s also the Ellora’s Cave jungle party, Heather Graham’s vampire ball and Dorchester’s Splashing by the Shore party, along with countless mixers, pool parties and happy hours.
The challenge with a conference like this, though, is knowing when to say enough is enough. It’s possible to be out chatting people up from 7am to 3am. Maybe longer. I’ve managed not to be out and about during the pre-dawn down-time. One writer I know with a book coming out fretted that she’d “missed people” the night before by being in a less-busy location around midnight.
This is crazy-making to me.
But then, I’ve never been the girl who went to all the right parties, either. I think you can drive yourself over the edge, trying to be everywhere. Of course you have to network. You have to be visible. You have to be willing to pimp your book. But I believe you have to do it your way, as yourself. Networking isn’t just shmoozing as many people as possible; it’s making actual connections to people. And if you’re always looking over someone’s shoulder to see who else you could be talking to, then you jeopardize the nascent connection you’re creating right then.
I’m a believer that the universe will deliver what you ask for. Which is why you have to be careful what you wish for. If you are yourself and follow the patterns that are real to you, then you will connect with people on the same path. Then, whether those people become friends, readers or your agent — maybe all three — that relationship is based on something you never have to force yourself to generate.
You never know which person holds the opportunities for you. Might as well enjoy the process of finding out. And, along the way, you might find you have something to offer them, as well.