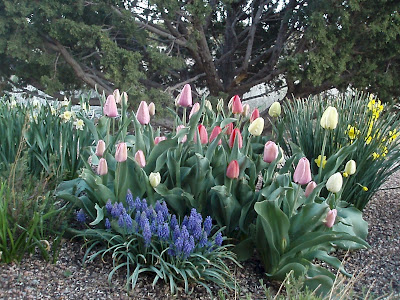 So, I’ve never been that much of a recycler.

Or rather, David never has been and so I easily fell out of the habit once we were living together. He became quickly annoyed at the accumulating sacks of newspapers, cans and bottles. Granted, recycling was a pain in Laramie. For a long time you could only take recyclables to a certain place during certain hours of weekday afternoons. Even when they finally set up bins, those were usually full.

David liked to grump that he saw the recycle place hauling truckloads out to the landfill all the time. He particularly liked to tease our more avid recycling friends about it. They would frown, uncertain if he was making it up or not.

At any rate, like many things, it was easier not to and so I stopped.

Now, I work for an environmental consulting firm and the company is big on green policies. Which I suppose is only good and right. We have to purchase 100% recycled paper for our printers, should we be so wasteful as to print something out in the first place. We have to recycle our used paper, etc. And we have to take these pledges.

Well, we don’t have to, but we’re exhorted to. And if you know anything about me at all, I’m just not the kind of gal you force into making pledges.

But every year there’s this big campaign where, in order to support the efforts of a major client, we have to go on the internet and pledge to replace our lightbulbs with the energy-savings ones. My boss, Laurie, who is fortunately also my friend, is probably shaking her head reading this, because she’s heard me go on about the lightbulbs. At length. Maybe with the teensiest bit of ranting.

Laurie doesn’t get me on this. The aesthetic doesn’t bother her. But this is also the woman who reuses corners of paper and the back of Post-It notes. She’s literally taken balled-up used sticky notes out of my trash, smoothed them out and used them for notes. Yes, we’ve discussed her issues, too.

So, a few years ago, I caved, I did the pledge, and bought my two ugly-making lightbulbs. Laurie archly asked me if I actually installed them. I replied that I did: in the basement laundry room. (Laundry rooms are supposed to have icky awful lighting – it’s practically a law.) She conceded that was good enough. Then the next year rolls around and we have to pledge again, what with more bulbs. I started to run out of icky places to put the bulbs.

This year’s drive wound up yesterday. Only now they have this whole list of things you can do to be more green. Laurie commented that it’s getting harder to show movement each year. Which is true – I actually already do everything on that list except the freaking lightbulbs. The ones I left behind in the old house when we moved. To help the new people be green, I told Laurie.

She suggested I put their names on the pledge.

I turn off unused lights and appliances. I keep thermostats low and turned down during low-use times. Growing up in the Western drought of the 70s, I’m a habitual water-saver. One friend gets irritated that I turn the water on and off when I do dishes. “Why don’t you just let it keep running?” she asks. Because I can’t.

And now we have curbside recycling, so we do that, too! Amusingly, I even mentioned this once before on the blog. Back in August David and I were going back and forth on recyclables that don’t fit in the bin. Which brings us to yesterday.

Remember how I bought all that nifty new patio furniture? Well, it came in great big boxes. Heavy-duty cardboard ones. Our recycle pick-up comes every two weeks, so two weeks ago, I set two giant boxes filled with smaller scraps of cardboard next to the bin for pick up.

Shockingly the Waste Management guys did not take them.

(If you watch Breaking Bad, you can see our New Mexico Waste Management trucks. Kind of thrilling, no? Yeah, I didn’t think so. But it’s funny to us.)

We had a rainy day last week and David told me I should put those boxes out in the rain so they’d soften up and he could tromp them down and put them in the garbage bin. Our recycle bin gets really full at the end of two weeks. I said, no, I was going to break the boxes down and set them out for recycle again this week. “A lot of effort for some boxes,” he says and I said I didn’t mind.

So I spent a bunch of time cutting up and breaking down the boxes, bundling them into neat stacks, tied up with rope. With carry handles even. And we set them next to the very full recycle bin for pick up yesterday. The Waste Management guy arrives, sits for easily five minutes on his radio (I can spy on this from my office window). He backs the truck up like he’s leaving, then he pulls forward again, gets out, contemptuously kicks aside my careful bundles of cardboard and lets the automatic truck arm empty the bin. And drives away.

David says, “That’s why I wanted you to put that stuff in the rain so I could have tromped it down and put it in the garbage.”

I should insert here that today is David’s second-to-last day of finals and he’s hitting full grumpitude saturation at this point. I’m not calling him on it because, well, I’m understanding and loving like that. So, I don’t say anything to this.

I call Waste Management, very nice girl tells me that, yeah, in Santa Fe they’ll take only what’s in the bin. I ask if I’m supposed to cut these boxes into tiny pieces and dole them into the recycle bin over the course of months and she responds brightly that that’s a great idea.

I tell her not so much.

So she tells me that I can drop the stuff off at the county. Coincidentally, the place is right by where I have a salon appointment that day anyway. I put the top down on the Jag, pull to the end of the driveway and load the cardboard into the back. David helps, grumbling that it’s an awful lot of effort for some boxes at which point I, maybe not quite so lovingly, tell him that I don’t mind, I’ll do it myself and to go back in the house to study. He says, “Okay, I won’t say another word.” And I, very lovingly, do not say “Hallelujah!”

It goes downhill from there. The place the chirpy Waste Management girl sends me too is the lovely county office with no recycling facilities in evidence. I end up talking to the County Manager, who’s a terrific gal and says “I do not know what is wrong with those people at Waste Management!” She draws me a map to the transfer station, by the landfill, by the dog park, all places I haven’t been to yet.

So, yes, I drive out to the landfill in my Jag convertible, packed to the rim with cardboard pieces. The woman at the gate takes one look at me, says “let me guess” and waves me through. I find the big bin o’cardboard, where a very earthy/crunchy young man is emptying his vehicle of rectangles like mine. We stand in the sun and companionably toss cardboard into the bin.

And yes, I felt pleased with myself.

True to his promise, David didn’t say another word about it, so I don’t have to ‘fess up to the further complications, which would have truly driven him over the wall. I’ll have to think up another reason for why I now know where the landfill and the dog park are.

The pledge checklist doesn’t include a category for “went to a lot of effort for some boxes,” but I’m feeling like a good kitty-cat this Earth Day.

The best part? I didn’t have to buy any of those stinking lightbulbs!

6 Replies to “A Lot of Effort for Some Boxes”