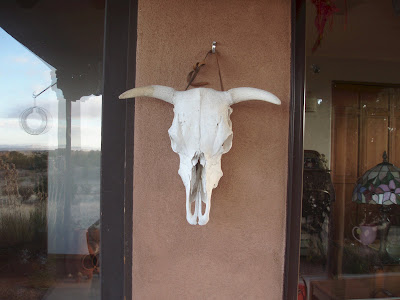 How do you like where I hung our cow skull? I’m feeling very Georgia O’Keeffe.

It’s hard to say if I’m imitating her, or Santa Fe design in general. Sometimes you do something just because it looks good. We happened to have this cow skull – which is kind of a long story. Suffice to say that David and I are both biologists and we have a lot of different bones and skulls. In this landscape they become less eccentric and more fashion statement.

RoseMarie sent me this article about a “new writer” giving up Facebook and Twitter. I kind of hate to give it the dignity of a link, because it’s really very silly. “Article” is really a strong word. It’s only 434 words long (yeah, I checked), which is comparable to my shorter blog posts. Really it reads like “Hey, this one friend of mine, who got an MFA? Well she gave up Twitter and Facebook, even though she was really good at it, you know? And she thought it totally worked for her.”

I don’t think I exaggerate there.

The “premise” was the “new writer” who’s been published in Narrative Magazine, which is respectable but hardly earth-shattering, and is, um, exactly one publication credit, cut herself off from the social media to concentrate on her writing. (By the way, the phrase that she’s “hoping to publish her first book soon” can be translated as anything from “it’s not done yet” to “she’s pitching to agents” to “she’s working her way through the university presses. In short, we have no idea where she stands on it.)

The result of the grand experiment? Even in the full essay, she never mentions if she gets any more writing done. Of course, she comes from an MFA frame and one of the amusing things about that mindset is three months of “focusing on your writing” isn’t really expected to produce anything in the way of wordcount. Deep thoughts can be enough. Her conclusion was she felt she “detoxed” from Twitter and maybe she needed to. Most of her musing is about whether she’s abandoning her social media platform when she needs it most.

There’s this guy on Twitter I followed recently. He followed me first, for a reference I made, so I followed back – he looked reasonably amusing and I usually give anyone who’s not only posting links a shot. He’s looking for a job. So he takes other people’s posts and mentions that he wants a job. For example, someone will say “I’m a writer – I have the papercuts to prove it” and he’ll reply “I need a job – I have a ‘hire me!’ sign to prove it.”

He’s clever and makes me smile, which is what it’s all about. So, I bit.

So what does he do? He replies, twice, about how he needs a job and how sad it is that millions of people don’t have jobs. He tells me a state and a vague kind of work and gives me absolutely nothing to go on. Oh, and he tells me he got on Twitter because he’d heard it was a great place to connect with people.

And yet – he completely failed in his opportunity to connect with me.

I think that’s the part people miss: if you’re going to do the social media thing, you have to do it because you enjoy it, to really connect with people, not to manipulate the medium to get what you want. It’s fascinating, really, how invulnerable the system is to insincerity.

I suppose that’s the difference, too, between imitation for the sake of status and repeating an idea because of the image it creates.

Can I help it Georgia had a brilliant eye? Maybe the cow skull is just my little way of connecting with her, in a cosmic non-Twittery way.