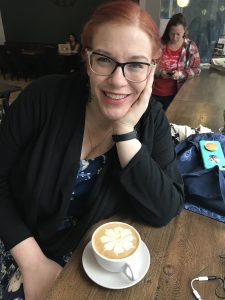 Thursday at conference ended up being Fantasy day for me. Not sure how that worked out, but there it is.

First thing in the morning, I met up with the agents for breakfast. Actually – before that I ran on the fancee treadmills at the hotel, which let me gaze out on palm trees. You know how I am about palm trees! In fact, I’m creating a blog label for palm trees. So there. I ran on the treadmill on Wednesday, too, and went to Starbucks for my skinny latte after. On Wednesday I had both the fitness center and Starbucks to myself. On Thursday? Whoa! I barely wedged myself in.

So, I already mentioned that this agent contacted me before the conference, to set up a meet to talk. The night before, a senior agent with her agency stopped by my table at the literacy signing, introduced herself, and said she’d be coming along for breakfast. It was very fun to meet up and hear what they had to say. I was joking with people that I wasn’t pitching at this conference – I was taking pitches. For all of you who have been in the trenches with me, being nervous about those pitch appointments, pinning so much hope on them, I’m sure you know how delightful this felt.

We talked about my favorite subject – me and my work – for an hour. Senior agent was great and said she’d be mentoring younger agent. And I really liked the gal who eventually said she was officially offering to represent me. She really groks what I write, which is the most important thing to me. Senior agent said she really sees Fantasy Romance as a genre on the rise and they’d like to make me the Queen of Fantasy Romance.

Obviously this was a great way to start the day! I attended the PAN retreat and learned a lot of interesting things about the market. At the Carina Press spotlight, Angela James mentioned Rogue’s Pawn – and how Fantasy Romance is getting more attention. She, and several other people, said Rogue’s Pawn had been discussed at breakfast and there was lots of good buzz swirling about it.

That night was the Fantasy, Futuristic and Paranormal (FFP). The hotel staff were just great helping us with this party – and seemed terribly amused by our costumes, as above. All the pics I’ve seen of that night so far are dark and blurry. Must have been all that magic in the air. We did a costume contest, the PRISM awards and had a fabulous time overall. Such a fun party, every year.

After, I switched into my pajamas for Harlequin’s PJ Party, which started at 9. I stayed to watch the Disney fireworks from our room, so I made it there a bit late. WHY I didn’t take pics, I don’t know! But everyone really wore pajamas and it was just a kick. They had candy – like M&Ms and cherry sours – and potato chips with warm blue cheese sauce to put on the side. I seriously felt like we should start making crank phone calls.

Tomorrow will be final wrap-up!