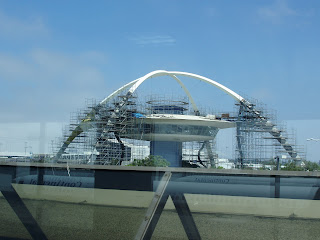 I haven’t been to LAX in a really long time.

I’m thinking 20 years or so. I flew out to Los Angeles for Spring Break my junior year, with two sorority sisters and five SAE’s, to stay at the Pacific Palisades house of one of the guy’s parents. Then I drove out with Darren a year after college and flew home from LAX. He was doing set design for Debbie Gibson videos which, if I hadn’t ‘fessed it up already, would tell you exactly how old I am. Think Electric Blue. Right.

At any rate, LA hasn’t really been a work destination and is almost never a transfer hub. San Francisco, yes; LAX, no. I don’t know why. Except on our trip to Hawaii now.

So, the iconic LAX control tower arches are heavily scaffolded, as you can see. Maybe everyone knew this but me. Turns out they’re unstable. I just Googled it to find out. And I swear I called them “iconic” before I found this article. To prove it, I exercised integrity and did not go back and edit out “control tower” and change it to “restaurant.” Note that article is pretty old — I feel quite sure the restaurant was closed longer than six months. I can see why it struggled since 9/11 – you have to exit security to get to it. Which is really too bad, because there are no decent sit-down restaurants in our three-terminal area.

Another reason why this isn’t much of a hub, I suppose. Or because it isn’t much of a hub, there’s not much reason to entice travelers with attractive facilities. That and lunch came with a nearly 10% sales tax. I don’t know if that’s special for the airport or if everyone pays that.

Even now I sit in a hallway. On the floor, my back to the window you see in the photo. There are electrical outlets here. Several of us are interspersed along the long walkway, sucking up the juice, charging up for the long flights ahead. If “they” were smart, they’d set up benches or chairs here. Except, as David points out, they probably don’t want to encourage this kind of behavior.

Outside, the sky is unpromising grey. I wonder if it’s true that it never rains here. LA sprawls before you when you fly in. A vast and thirsty city.

I’m ready to move on.