I’m over at Word Whores this sunny Sunday, talking about my Jennifer Paris identity and writing sex scenes.

This is Deliverance, by Manuel Nuñez. The same artist who did Strait is the Gate, which I mentioned previously.

Looking him up, I’ve discovered he does commissioned portraits, so now I’ve got this whole fantasy spinning about how I’ll take money from my first wildly successful contemporary fantasy novel and have a portrait done.

At any rate, I’d had an image in mind of a painting of his I *thought* I’d seen, that looked like a woman laid out for a funeral, but I didn’t find it in his gallery. (On the other hand, I see the piece I own has gone up considerably in value, so I’m feeling all nifty about that.) And then I see Elizabeth Taylor passed, so an image of a lovely woman resting in peace seems all fraught today.

My point is: I’m giving up the Jennifer Paris alter ego.

I know, I know. She was with us such a little time. We hardly knew her.

At any rate, in conversations with the lovely Angela James over my contract for Carina Press, she pointed out that if I intend to use Jennifer Paris as an author name, then I should have her as a social media identity.

Angela is quite savvy about social media, I think. Her blog posts and challenges are frequently cited. She’s all over twitter. And she’s really a terrific person to work with. She has emailed with me, answering my questions with genuine friendliness. In an aside, the contracts/legal guy at Harlequin headquarters is also really warm and friendly. I’m already so impressed with this corporate climate. All of this makes me think they know something about creating a virtual community.

So, I’ve bantered back and forth with Angela on Twitter long before this. And with my fabulous new editor, Deb Nemeth. They know me there by my twitter handle, @jeffekennedy. In fact, I was pretty sure the Carina gig would be a go, because I saw Deb started following me on twitter a couple of weeks before I got the actual phone call. Some of that was to see if I’m psycho, I think. Fortunately I managed to fake that well enough not to set off any alarm bells. I would be very carefully composing tweets for a while, thinking through the potential impacts, then I’d forget myself and go off on riffs with someone and – oops.

It’s a good argument for just being yourself on social media – cuz you’ll forget and do it anyway.

I told Angela I was doing the “Jeffe Kennedy writing as Jennifer Paris” thing and she said no, no, no. Actually she said it’s not the same thing at all. Since I really don’t want to “flesh out” Jennifer Paris and tweet or blog as her (she was only a cardboard cut-out anyway), I decided to retire her.

So, there you have it. Jennifer Paris is officially a one-off. Goodbye, darling – it was fun while it lasted.

Now I’m All Jeffe, All the Time.

Let’s get this party started. 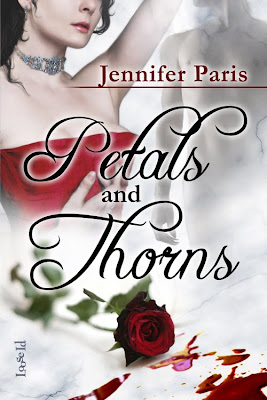 Finally a cover for Petals and Thorns!

I think they did a great job. I love that you can see the Beast’s claws and that the artist, Cris Griffin, took my suggestion of a bloody rose. It works out especially well because Robin of Robin Ludwig Design made me business cards with a very similar image (ah, the consistent world of stock photography). She also adapted it for me to make a third “doorway” on my website for the erotica stuff. 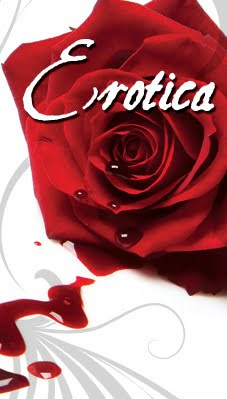 And if any of you are wanting a high resolution image of the cover, I’ll put it there. Blood and roses. Flowers seem to be a big part of my life lately. I’m not sure what that’s about.

You might have missed it, buried as it was amidst my other angst. I would not blame you if you were skimming at that point. At any rate, I’m signing the contract today and they’ll publish my naughty take on Beauty and the Beast in early summer. I’ll use the pen name Jennifer Paris, which is half of my pron name. And no, I didn’t misspell pron. You pretty much have to use the word that way to defeat the icky-bots that crawl the web looking for that kind of thing. As it is, people search for bizarre stuff on writer’s websites. Here’s an example from Meljean Brook. I just love how she offers the searcher alternate scenes.

I’m sure you know, but your pron name is the name of your first pet combined with the first street you lived on. Technically I’d be Stormy Paris, but that’s just a little too.

My friend Cynthia Eden gave me excellent advice on the pen name question. She said that if I want to differentiate my “Super-Sexy tales” from my other stuff, then go for the pen name, but own up to it, to take advantage of my networks, such as they are. Cynthia delights me that she refers to a BDSM story as a “Super-Sexy tale” – she’s this charming combination of polite Southern lady and frankly sensual writer. Cynthia put it well when she said that, after all, these are just gradations of what we’re writing. KAK also talked me out of my tree, to own this and be proud.

I’m thinking back to a time, must be over ten years ago, when I bought this ebook “Writing Pron for Fun and Profit.” I never got around to reading it. It was kind of dull and the first part didn’t tell me anything I didn’t know. But I’ve always had the idea that I should try this. For fun. Profit would be nice. Then Samhain put out a call for an anthology of Red-Hot Fairy Tales. I was between novels, so I wrote up Beauty and the Beast. I always wanted to know exactly what made him so Beastly.

Samhain turned me down on the anthology. Another friend, Dawn McClure, who writes for Samhain pointed me to Loose Id. (She also pointed me to one other high-profile epublisher who turned out to be uncommunicative and unprofessional – very odd.) So far, Loose Id has been wonderful to deal with. I think it’s a good fit.

And, what do you know? Their logo is a lizard, which has become the good luck emblem of our new Santa Fe lifestyle.

Must be meant to be.