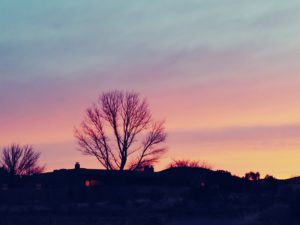 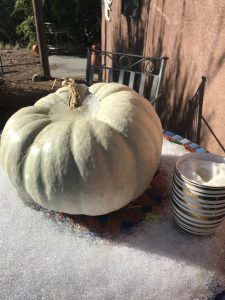 I was trying to get the moon in the clouds last night, but this ended up looking like an avenging angel swooping in over the Santa Fe Railyard.

Particularly as we were sitting outside, having some lovely prosecco, after watching WONDER WOMAN. Speaking of avenging angels.

So, yes, I am joining the hoards who are totally in love with this movie. Even though I made a point of seeing this in the theater – which I rarely do, as I stream most movies at home – I still didn’t expect to be so thrilled with it.

The Amazons were incredible! My fantastic (Campbell-award nominated!) writer friend, Kelly Robson, pointed out that there are only women in the movie for a long time. I hadn’t even noticed, but I reveled in the skill, power, wisdom, and athleticism of the Amazons. The armor! Those muscular thighs! The sparring and battling!

It made me realize how starved I was to see heroines like this. They were never once silly or clumsy or apologetic. When they died battling the Germans, they died heroically. And when they kicked ass, they did it mightily!

Diana Prince/Wonder Woman is everything I could want in a heroine. She is courageous, firm in her convictions, a mighty warrior, and full of compassion. The moment she kneels behind her shield fending off a hail of machine-gun fire gave me chills. As if all the horrible events of the recent  months could be dashed away as easily, if only we keep to our resolve. Wonder Woman never once falters. She battles on with strength, agility, and integrity.

Her relationship with Steve Trevor was pitch perfect. And not only because it’s exactly the kind of relationship I like my fantasy heroines to have! They enjoyed each other’s humor, their friendship deepening beyond the obvious physical attraction. They complemented each other’s skills and the movie absolutely allowed him to play supporting role to her heroism. He loved her in all her brilliance and power – never once detracting or mansplaining.

If I ever get to have my Twelve Kingdoms and Uncharted Realms books made into movies, I would love, love, love for Patty Jenkins to direct. The woman totally gets it. It’s good to have things to wish for and that’s top of my list now.

A girl can dream! She can also kick serious ass and still have love and compassion. Look what arrived late last night! Yes, the UPS guy came by around 7:30 with this largesse. Finished copies of THE TALON OF THE HAWK!!! I may have fondled them.

I’m over at the Contemporary Romance Cafe today, for my usual first Thursday post, talking about prickly heroines and mixing it up with Ursula from TALON and Detective Kate Beckett from Castle.

Also, I did a really fun interview with Jennifer Estep over at Magical Musings. It includes a giveaway! In my typical style, after I glommed her terrific Elemental Assassin series, I stalked her on Twitter and made her be my friend. She kindly suggested doing this post, for which we are now both grateful, being equally crazy getting ready for the RT Convention. I get to have brunch with her there and meet for reals – very much looking forward to that!

Finally, the crazy gals at I Smell Sheep also did an interview with me and are hosting a giveaway also. More than you *ever* wanted to know about me?