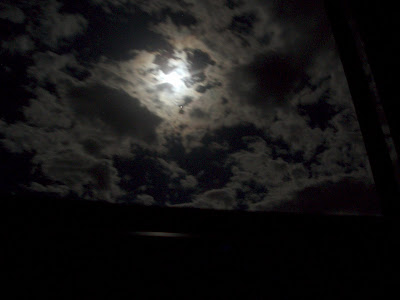 I said to David last night that it’s very tempting for me just to tuck in here with him, in our house in the country where I know practically no one.

This was after he didn’t mind me jumping up to take a picture of the moon after he’d made love to me in a particularly sweet way, because I was feeling all distressed about a social conflict. (Sorry if that’s TMI — just keep going, I won’t do it again.)

Some philosophies promote the idea of becoming a hermit. The whole fantasy of living alone in a cave or on a mountain top. Or even in a cloister with a lovely vow of silence.

I come by this naturally, as an only child. I love to be by myself. It’s soothing. A friend once argued with me that I only like to be alone because I don’t have to be. Meaning that I have a partner where she didn’t. I could see her point, but I don’t think that’s the case.

In fact, David is a miracle of a person for me because being with him feels as good as being alone.

I think it’s a harmony thing. I have friends that draw energy from social interaction. They thrive on it and spiral up ever higher. For me, it’s a drain. I can do it for a while, but after a time I have to be alone to recharge.

But I think the hermit thing is a cop out.

The way I see it, we’re all here on this planet, crammed together, to learn something. And the something clearly involves interacting with each other. Otherwise it wouldn’t be so damn painful. And joyous, too.

It’s a funny world now. Though I live out in this quiet house and frequently see no one but David and the fur family all day — and yes, I love love love it — I talk online to many many people. Some friends, some acquaintances. It’s almost like being on campus again. Some people I just wave to. Some say something funny as we pass on the sidewalk. Others I sit down and have lunch with. It feels like a full social day.

And, as you probably suspect, I love that I can turn the connection off again, too.

Hey — at least I’m not doing the hermit thing!