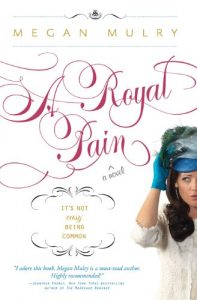 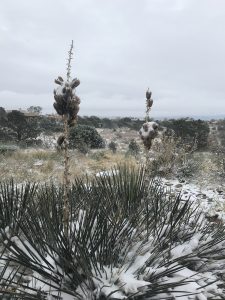 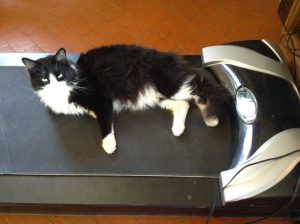 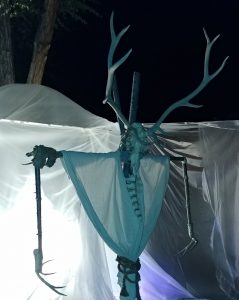 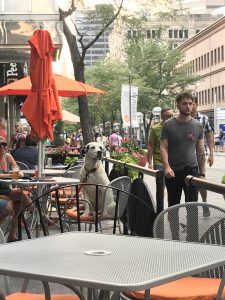 I loved how this dog got their own chair at the bar along Denver’s busy 16th Street pedestrian mall. Spotted while having drinks with the lovely and witty Limecello. I reorganized my office over the weekend.

I know, I know – this is hardly earth-shattering news. But you all know how it is. I spend in the neighborhood of half my day in this room, between my day job and the writing career. To rework it after several years has a profound effect on my life. Plus, I like the change much better than I’d expected to.

See, the day after Christmas, I went online and bought myself a treadmill desk. All of you out there looking for those great articles about the DIY treadmill desk or the cheapie alternative? You will not find it here. Yes, I looked at all of those articles and people gave me great advice. But, in the end, I wanted a long-term solution that I could live with for my roughly half a day that I’d spend with it. I’ll do a post on my solution when it all arrives (not for several weeks), but the short version is that I’m getting a hydraulic desk that I can raise and lower, so I can either sit or stand or walk while working at it.

The new desk is significantly bigger than my current desk, so I knew I’d need to rearrange. Especially if I wanted to keep my window view, which was a high priority for me. Since I couldn’t have my new treadmill desk yet, I could displace that excitement into a bit of New Year’s new office energy.

Basically all I had to do was flip the furniture from one side to the other. Here’s how it looked before: My story board was propped on a little table to the left of my desk. And – well, it turns out I don’t have a good picture of the other side, but all my computer/day-job related stuff (printers, scanners, files) were to the right. When we moved in, I set it up that way because there’s a handy-dandy power strip along that west wall. It seemed logical to put all the plug-in stuff next to it. But the problem with that kind of thing is the power strip location drove everything else. Which turns out to have been not the best choice.

Part of this comes from changes in technology, but all that STUFF is now to the left of my desk, which you can see in the very top pic. The equipment is all smaller, combined, with fewer cords. I also like the serendipity of how the painting of the view out a window to the ocean kind of carries over from my real window with the desert view.

Now the corner is much more all about my writing face. I love how my story board is now right there – and I can swivel in my chair to see it and contemplate. (It’s set up for the Phantom e-serial now, so if the act structure looks different now – for those alert blog readers who notice such things – that’s why.)

I don’t know if it shows in the pictures, but the difference in the feel of the space, the feng shui, if you will, is startling. More, I find the change has stimulated me. See, habits can be good things. The terrific thing about habits is they carry us through tasks that don’t require thinking. Like learning to drive. At first it felt like ten-thousand things to think about – clutches, accelerators, brakes, steering wheels, turn signals, wipers, lights, fifteen-million other drivers in a mad whirl – but over time that becomes automatic. We can drive our entire commute without really thinking about it, which lets us pay attention to things like audiobooks. But this energy-saving feature of our natures comes with a cost – it’s easy to miss stuff this way. Who among us has not been driving down the highway and suddenly realized half an hour has gone by that we don’t remember? What did we miss?

Deliberately breaking a habit can bring new awareness and stimulation. Just being in my reversed space makes me have to think about where the phone is, where something is now kept. I feel excited and ready for new things.