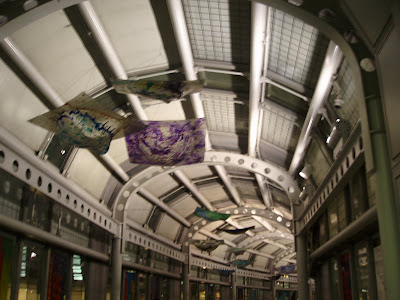 Usually, I don’t have time to notice stuff at Chicago’s O’Hare “You might have a ticket but you can never leave” airport. But yesterday, I was there for a 3.5 hour layover, watching the rain turn to snow and fervently praying it wouldn’t turn into an overnight or, worse, days of layover. It could have happened, too. My Roanoke, Virginia flight took off on time, but many D.C. flights were canceled.

According to the cell conversations of the people around me, which I consider to be a more reliable indicator than most.

It seems like one usually gets either 30 minutes or hours at O’Hare. This time I opted for hours. Because I really hate missing connections. And more, I really hate missing them there. In fact, I go to great lengths to avoid connecting through O’Hare. In double-fact, I’ve been so successful in this resolve that I apparently have not been there in so long that I totally forgot where I like to eat there.

This might sound stupid to you, but I’ve spent enough time in airports that I know pretty much where I’ll eat at each one. Sometimes even what I’ll order. Are you thinking this is not adventurous? Then you’d be correct. Someone who spends a lot of her time in airports shudders at the thought of adventure. She wants reliable, relaxing and reasonably nutritious.

I’ll even, all things being equal, choose connections through airports that I have places where I like to eat. And shop. And sit in pretty white rocking chairs to watch planes and write.

So, I had lots of time to kill at O’Hare. I wasn’t trapped to the singing underground tunnel between B & C concourses, nor to the claustrophobic Y of the E&F concourse hell. Instead I wandered over to the Europe of O’Hare and found concourses G, H & K.

Where the beautiful people live.

It was pretty there. And serene. Brushed steel, wood panels and soft foreign voices. Oh, and a Macaroni Grill, where I could sit and pretend to be having a lovely dinner out instead of being trapped behind airport security. A couple of incredibly gay Italian boys sat at the two-top next to me, loving the hot bread, thinking the espresso too weak. They argued about the time difference between Los Angeles and Las Vegas and whether you could fly directly from Long Beach, I told them to pile their stuff on the bench opposite me, as long as they said hello to my invisible friend, which they cheerfully did.

I enjoyed their semi-anonymous company.

Which is good, because not long before that I composed a tweet in my head: “Where do all of the people in airports come from? I like most people I meet. But in airports, I hate them all.”

People behave badly in airports, I think. No one wants to be there — they all want to be either where they’re coming from or going to. Maybe people just can’t be human in a place they don’t want to be. Maybe they can’t help being hateful.

And maybe the secret, like all of life, is to find the quiet, serene pockets where people are where they want to be, doing what they want to do.

Also, to look up and see the glass starfish someone hung for you, just in case you weren’t running too fast to see.