I put this photo on my podcast yesterday, but social media declined to show it, so I’m reposting! I spent time on Sunday lying in the sun and reading. The depthless blue skies were perfect for contrails, which seemed to appear from between my toes. Really lovely.

There’s been lots of talk on social media about the final season of Game of Thrones. Episode 4 aired on Sunday night (5/12/19) and there’s two episodes to go. While the battle scenes have been as epic and sweeping as promised, many people feel the show has gone off the rails. This is not the ending many of us hoped for.

Of course, all along, we were braced to lose beloved characters. The story created by George RR Martin has taught us well. Characters we love will die, sometimes suddenly, often brutally, and frequently without warning. He’s a master storyteller and he’s deliberately subverted the heroic fantasy tropes, enticing us to love and believe in a character, and then killing them suddenly. It’s so deftly done that, in retrospect, you can absolutely trace how the character’s personal flaws – hubris, naivete, etc. – lead to their untimely demise.

So, I don’t know about you, but I was braced. I had a checklist in my head of who’d be likely to do something stupid and die. I didn’t WANT to lose those characters but I accepted that it had to happen. Especially as the title of the show (which departs from the books) promises a life-and-death tournament leaving a single person on the Iron Throne. Also, as the story progressed, it became clear that the threat of the Night King and the devastating hordes from the frozen north posed a much greater problem than who got to be in charge. Former enemies became unlikely allies – in a tremendously satisfying way – to band together to face this world-killing threat.

I won’t go into details of how that aspect of the plot has failed our expectations of the dramatic progression of events. Instead I’d like to address why some of what’s going on feels so disappointing. It’s something I see happen a lot in TV and movies, especially long-running ones.

See, visual entertainment is necessarily plot driven. There’s a lot of reasons for this: visual narratives don’t allow for internal exploration of characters (which is why they sometimes resort to clumsy voice-overs); they appeal to a much wider audience that expects a faster pace of events with no “navel gazing;” and plot-driven stories are easier for a team of writers to produce. (They’re easily outlined in advance and produce clear dramatic beats.) I’d argue that this is why Romance seldom works in a visual narrative since love stories are character-driven.

Now, George RR Martin is a character-driven writer. Yes, the plot of the series (which is called A Song of Ice and Fire, which speaks much more to the Night King arc than the Iron Throne arc, just saying) has a complex set of plots and subplots, but they all arise from the character motivations. What the characters want drives the narrative. What happens in visual entertainment, when plot takes over as the primary driver of the story, is the character motivations can become subverted to serve the plot.

In other words, people suddenly stop acting like themselves and do things we don’t believe in order to advance the plot.

So, yeah, if your favorite Game of Thrones characters seem to be acting, well, out of character, it’s because they are. They’ve stopped being the complex, nuanced individuals (likable or not) that drew us into the story, and have become finger-puppet versions of themselves acting against a spectacular backdrop of dramatic plot.

Another example of this that will forever stand out in my mind is a late-season (this is a THING) episode of Buffy the Vampire Slayer, where Spike attempts to rape Buffy. It’s a clumsy scene, shocking – and was written specifically to address a rape-prevention week theme. Now, I’m all for preventing rape, education, and using story to reinforce that message. But for those of us invested in those characters, it was a total WTF moment. Spike nursed a soul-deep, unrequited love for Buffy (and we know she loved him, too), and he would NEVER have hurt her. It made zero sense. The plot made him into a paper cutout to demonstrate an issue.

As a character-driven writer, this drives me crazy. As a viewer once-invested in beloved characters that have been eviscerated into paper cutouts, I mourn. Really, I’d rather have wept over their deaths than see this happen to them. I’m not even sure I want to watch the last two episodes, frankly.

Anyway, it’s too late for the show. What’s done is done. But the takeaway for writers of all kinds is: RESPECT YOUR CHARACTERS AS PEOPLE. They are not puppets in your personal play, no matter how much you might feel like you are the god of your world. As creators and storytellers, we owe allegiance to the gift of these people entering our stories. We do them honor by listening to them.

To do otherwise fails us all. 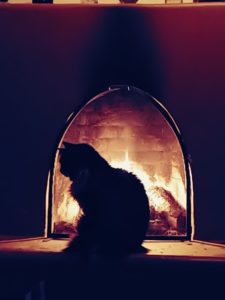 Last week saw the release of DARK SECRETS: A PARANORMAL NOIR ANTHOLOGY. What – you didn’t know “paranormal noir” was a thing?

I finally got a chance to read the stories by my sister contributors and it’s really a cool collection of stories. We really had only those two elements in common – something paranormal and noir shading – but the overall feel is remarkably consistent. At any rate, there’s a Goodreads giveaway going on for it, if you’d like to win a copy. But it’s only .99 cents, so quite the bargain if you choose to buy.

I’m over at Word Whores, talking about intelligences crossing into our minds and hijacking our stories. I’m over at Word Whores giving my tips for avoiding the dreaded pitfalls of Character Cloning. I’m over at Word Whores today, because the usual Hump Day Word Whore, Linda Robertson, kindly switched with me. I’m talking about Rogue’s Pawn and how my heroine is and isn’t like me.