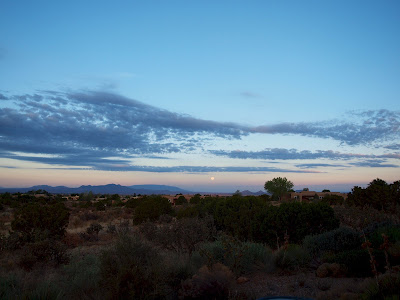 I had to catch the full Thunder Moon at dawn this morning, since last night, appropriately enough, thunderclouds obscured the moonrise.

@angelajames Angela James
Me to agent: “I’m going to pass on this author. She’s had occasion to be very rude to me & others in the past.” #pubtip : Be professional
14 Jul via TweetDeck

This is noteworthy because we’ve all suspected it’s possible for this to happen. The publishing community is quite small, often insular, occasionally incestuous (and I mean that in the nicest possible way). Whether at conferences or online, we are in each other’s laps much of the time. There are no secrets. When questioned, Angela followed up with:

@angelajames Angela James
To clarify previous #pubtip, I’ve never met author, but she’s been VERY rude to me re: past rejection letters. & to readers online as well.
23 hours ago

@angelajames Angela James
@salys I didn’t look at her writing this time.I’m not interested in working w/someone who has no respect for anyone else, readers or editors
23 hours ago

@angelajames Angela James
@salys if I know up front that’s how she acts, and she’s already destroyed her online rep, her writing is irrelevant if she won’t sell
23 hours ago

@angelajames Angela James
@salys also, my stress level is high enough. I don’t need to purposely add something to work situation that would make it worse
23 hours ago

This is pretty much what I would have predicted. Angela is at the helm of a digital-first imprint of a major publisher. She knows that online interactions play a huge role in this world. The days – if they ever really existed – of a writer getting to play the diva and curse anyone who crosses them are well and truly over.

It reminds me of the small town thing.

When I moved to Wyoming for grad school, I went from living in Denver and St. Louis, to a town of 26,000 people. Functionally the population is half that if you only count the year-round population. Now, I was an *ahem* aggressive driver. Not rage-driver, but definitely big-city driver. Other cars were never about people to me – they were simply “traffic.” Nothing personal.

Imagine my surprise when people called me out for it.

“Hey, you cut me off this morning!”

“Geez, how fast were you going down Grand yesterday afternoon??”

“You tailgated me all the way to Safeway – what’s up with that?”

Once I got over the fact that these people actually looked in my car and recognized me, I discovered I was now accountable for my driving behavior in a way I’d never been before. No longer anonymous, I had become part of a small community, for better or worse. I had to change my behavior.

I suppose you could argue this impinged on my freedom to be obnoxious. Small towns can be oppressive because they do limit freedom of thought and action. The social mores can be restrictive. But, there’s always the option to leave that community. If the reasons to stay are compelling enough, you’d better learn how to get along with your neighbors.

And if you want them to hire you or elect you to city council? Find a way to be congenial.

It can’t be said often enough: watch what you say in public. Imagine that everything will be heard and remembered, and absolutely held against you in the court of public opinion. People will forgive you the odd slip, but a pattern of continued bad behavior? No no no. My writing buddies and I have the Cone of Silence. All snarkiness must occur inside the Cone.

Make sure it’s really on, too.

What was most amazing to me about yesterday’s exchange was an author replied to Angela saying:

I didn’t include her tweet info here, because I think she’s an idiot for posting those and I’ll save her this extra bit of self-induced humiliation. The tweets are still up, though, for anyone who cares to see… and to track that her data matches up to Angela’s author-in-question.

Perhaps it all comes down to learning to take criticism. Live and learn.

When you do get called out for something, like I did? It’s an opportunity for course-correction. Apologize and fix the problem. People will forgive. They’ll eventually forget.

But not if you keep behaving badly.