When I’m not penning my latest work, I spend some of my time online at a few of my favorite blogs.

I’m at the Fantasy, Futuristic and Paranormal blog on October 25th!

I’m at the Fantasy, Futuristic and Paranormal blog August 31st!

Come join me on August 9 at Everybody Needs a Little Romance! 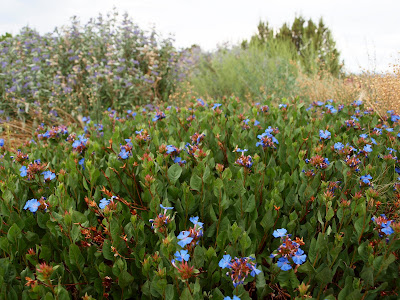 I had what I think of as my Water World dream last night.

It’s one of my standard dreams – you know the familiar ones you repeat over and over. Like the being on stage and not knowing your lines one. Or taking the final exam without ever having gone to class. Or being naked in public except for some feathers and a beak.

What, you don’t have that one?

At any rate, Water World is a water park in Denver. No, this has nothing to do with Kevin Costner. It’s one of my very favorite places to go, though I haven’t been in the last couple of years. I love riding the donut tubes down all the different swirly slides. It makes me feel like a kid again, to spend the day in my swimsuit. At the end of the day, my hair is wet and snarled, I’m sun-baked and water-soaked, deliciously exhausted.

My Water World dream is one of those “going there but never quite making it” dreams. It’s not a a bad or frustrating dream. We just spend the day going through the admissions turnstile and getting different color wristbands. We get distracted and have to go save people or find treasure. We spend a lot of time in the parking lot, seeing the rides from a distance. Elements from Elitch Gardens, the amusement park of my youth, which has since been relocated and transformed into a Six Flags conglomeration, find their way in. The giant rise of the wooden roller-coaster always figures prominently.

It’s actually a fun dream, full of the anticipation of arriving. I’m eternally poised to have the best day ever. It’s also familiar and, in an odd way, comforting. It’s part of who I am. The sum of so many experiences.

These are the kinds of qualities it’s difficult to give characters. Someone recently told me that common wisdom is that novels about dreams rarely work well, because dreams inherently have no structure, which gives the story a “mushy” feel.

I can totally see that.

In fact, one of the “rules” writers like to cite is that you should never have dream sequences. That editors hate them. I suspect this is the “mushiness” coming into play. Usually if a character has a recurring dream, it’s a nightmare, as JD Robb’s heroine, Eve, experiences. Of course, she has the marvelous latitude of an ongoing series to use that dream as a theme, a device that reveals where Eve is emotionally.

Now I totally want to do something like this. Damn the rules – full speed ahead! 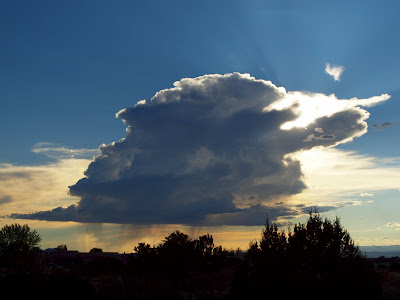 Isn’t this cloud a great metaphor? Sailing along, giving rain to a very select portion of the landscape.

So, yesterday was a pivotal day for me.

I received a contract offer on Obsidian.

This is the novel that started it all. That took me from nonfiction to fiction. My red-headed firstborn. This is the one that everyone told me they didn’t know how to market, because it’s hopelessly cross-genre. One famous author friend who graciously read it said it’s like I wrote an epic male fantasy from a very female perspective. She also said I was forging a new path with it and that it would feel like wading through waist-deep snow.

Boy did she call that one.

So, yesterday, after 3.5 years of wading through waist-deep snow, I finally broke through.

I can’t even tell you how it felt. I sat in stunned silence for quite a while, just exploring the feeling of not STRIVING any more. All those feelings of hope and grief and anger and determined outrage I’d been piling on all that time, just let go. I giggled. I burst into tears when my mom sent flowers. What a ride.

I have to admit – I wouldn’t have felt this so much if it had happened right away.

Now, I’ve let (Possible) Agent who has Obsidian know that I have an offer, as she asked me to do. I’ll wait to see what she says and then move from there. But no matter what, Obsidian will see the light of day and I’m just so, so grateful. 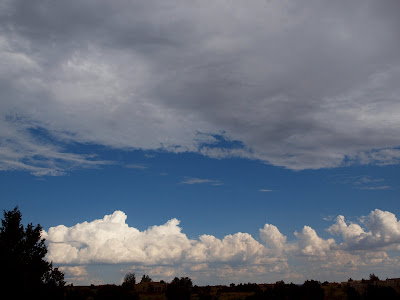 Bows and flows of angel hair and ice cream castles in the air. And feather canyons everywhere.

For those of you old enough to remember this song, you’re welcome for the ear worm. You know, aren’t we due for a really good cover of Both Sides Now? Someone should really get on that.

So, it’s been an interesting week in the publishing world, vis a vis agents and electronic publishing.

On Monday, much-sought agent Jessica Faust announced on the Bookends, LLC blog, that the literary agency would be developing an epublishing arm. At the time I’m writing this, there are 152 comments on the post. See, they’re not the first agency to announce that they’re partnering with their authors to assist them with self-publishing their backlists. Bookends, however, is taking this one step farther and plans to establish an entire epublishing arm, which would involve them screening submissions, editing books, electronically publishing them and marketing. For this, Bookends would receive an unspecified split of the revenue.

This is a huge move, from agenting to publishing.

Yesterday, Courtney Milan, romance author and lawyer, posted an excellent breakdown of the situation in An Open Letter to Agents. Now, she does not specifically address any agency in particular – I’m the one drawing this correlation. Courtney lays out the situation in a clear and logical way. She promises a second part today, which I’m interested to see.

What it comes down to for me is Conflict of Interest (COI). Now – full disclosure – COI is a fairly large part of my day to day considerations. I work for a private environmental consulting firm, funded largely by government contracts, primarily EPA. We have meetings about COI fairly often, because we owe it to our clients to do so.

For example (and you can totally skip this part if it’s too boring), a company that analyzes water samples contacted us. They’ve developed a database system for wastewater plants that processes the results of their water tests, compares the data to EPA’s regulations and tells the plant operator where they are in compliance with the law. This company would like to develop something similar for drinking water. They came to us, because we’re the drinking water experts. All fabulous, right?

Well, no. Because one of the things we do for EPA is assess water system data and their determinations about whether they are in compliance with the law. I’m essentially an auditor. So, if I were to help design a program to determine compliance, while I’m also assessing how well a system using that program does it, then I have the appearance of a COI. Because I could skew the results in my favor.

Now, I would never do that. I’m an objective scientist with strong personal and professional ethics. None of that matters – our company could lose multi-million dollar contracts if there’s any chance of COI. Because my client, EPA, awarded me this contract to be their agent and no one else’s.

We had several meetings on this issue and eventually decided any role we’d play would have to be one step back. I can explain the federal regulations and the nitty-gritty of compliance to the program developers, but how they set it up is up to them.

If the agent becomes a publisher, she now has an interest on the other side of the fence. To my mind, this is more than even just the appearance of COI. Arguably, agents who are also writers have this same conflict. Breezily declaring that, oh they have no COI and, besides, they have integrity simply means nothing at all.

In fact, that some agents fob off COI as irrelevant says to me that they haven’t seriously considered the issue.

I’d believe that. It might be that you only really think about these things when you have to go through three meetings investigating all the possible COI ripples for each new project, that it becomes a serious consideration.

I think we all know the answer to that.

I venture that this is why literary agents aren’t terribly concerned about COI. There’s really no reason for them to be. The only people hurt by any COI on their part is the writers.

It remains to be seen whether we’ll do anything about it.