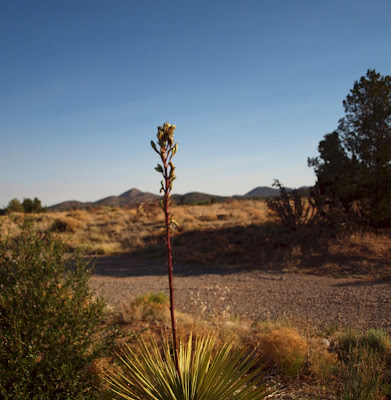 Update on the yucca flowering:

If you haven’t been following along with the Blooming of the Rescue Yucca, it started sending up a spire here and was much bigger here. I should have done an update last Monday, but I clearly had important ranting to do about appreciating the role of serendipity and chance in life.

So, you’d think there would be actual flowers by now, that there would be fragrant blooming. After all, it’s been weeks and weeks. Surely that’s enough time and effort? But no – the buds are covered with some kind of sticky stuff that the bugs seem to like. It’s all alien-looking and kind of Invasion of the Bodysnatchers.

The moral here is obvious.

Not all stages of growth are pretty. Things progress on their own schedule.

It always seems like a long time, when you’re waiting for the blossoms.

Hey – I don’t tell the dream faeries what stories to send.

Also, Petals and Thorns finalled in another contest – More Than Magic – for best novella! I’m so pleased to see P&T getting some love.

I don’t even mind the little bugs.