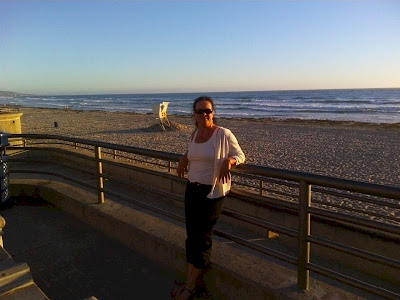 David snapped this pic of me on the Pacific Beach boardwalk. I like how relaxed and happy I look.

And slim. *note to self: wear those black capris ALL THE TIME.

So, remember back in mid-March when we heard that car wreck? I picked up the things the next morning and photographed them. I had a number of conversations with people about it – in the comments, but also on Facebook and Twitter. My friend from college, Felicia, urged me to try to find the gal because of the Prada reading glasses – the thing Felicia herself would have been most sorry to lose.

I tried tracking the name on the receipt. No luck. My Google Fu is usually quite strong, but not in this case. A couple of prolific local tweeters even took it up to no avail. Nothing in the local news about it. So, I called the police non-emergency line.

Yes, the dispatcher acted like I was nuts for asking.

Finally, I managed to convey my non-stalkery desire to simply return this gal’s things (I didn’t mention follow-up articles on this blog – really hard to make that sound non-stalkery.) The dispatcher said she’d give my information to the Sheriff’s Deputy who was on scene and he’d call me.

He finally did, nearly a week later.

He also proceeded to interview me on precisely what my deal was. He asked what things I wanted to return to “the young lady involved.” By this time I’ve managed to glean that she survived. Totally unimpressed by my catalog of her detritus (I could practically hear him thinking “eye-pencil? she thinks this is important??), he finally says he’ll give my information to the young lady and, if she was interested, she’d call me.

Yes, he absolutely made this sound unlikely.

And she didn’t, for a really long time. By now it’s April and I’ve kind of forgotten about it, except that I have a little paper bag of her things in my office. I start to think about what I should do with it if she never calls.

Then, one day my cell rings and it’s her.

She’s young. So young that her thoughts kind of zing from one topic to the next. She tells me they rolled the car three times. When I tell her we called 911 when we heard the sound, she receives this information with wonder, somehow not processing this. When I say it’s a miracle she survived and wasn’t hurt, she says oh yes and how they were going 75 miles per hour. (It’s a 40 mph zone.) I wonder how she knows this, if she was driving, who “they” were, but she’s already flown past the subject. She wants her things, but – oh – she has no car now, cuz – duh – she wrecked hers! She’ll have to talk her dad into giving her a ride. I tell her where my house is. She says she’ll call when she can come by.

I think about calling her back, to tell her we’ll be gone for a week. I think better of it. If she calls while we’re on vacay, I’ll just have to say so.

Then, yesterday afternoon, my cell rings. A female voice says “are you home?”

She hastens to fill the silence, “this is Carrie, the girl who was in the car wreck? I can get a ride to your house to get my things, if you’re home. Only I don’t know where your house is.”

So, I tell her again. Five minutes later, a shiny Honda Element pulls into the driveway. I walk out to the patio with the bag. I nearly bring my camera, but – it just seemed wrong. She’s younger even than I thought. Awkward. Shakes my hand and grabs the bag. Reaches in and grabs the Prada reading glasses case with a triumphant squeal. “This! This is what I really wanted!”

Nod to you, Felicia.

I’d envisioned our conversation when we met. How I’d tell her I wrote about her wreck on the blog and all the nice things people said. I think she might say something more to me, but she just bounces and says good-bye. She runs back to the car, opens the passenger door and brandishes the bag of things, doing this little hip-bobbing dance for her mother. The mother, by her unmoving silhouette, seems unimpressed. I’m kind of surprised she doesn’t get out of the car to meet me.

I’m left today thinking about stories and connections. About non-lethal life lessons and whether this carefree girl has learned anything.

I wonder, too, what I learned.