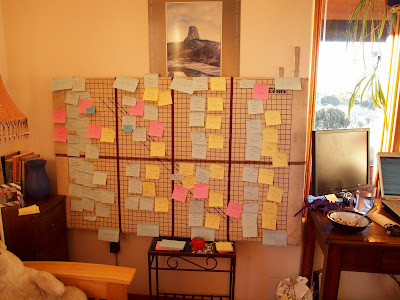 A while back, I took a class in play-directing.

Okay, this was almost twenty years ago. So a titch more than a while.

At any rate, I had several reasons for doing it. I was in grad school getting a PhD in neurophysiology and all the science was making me feel like a left-brain cripple. Some of my best times in college had been running with the theater crowd. I took enough acting classes and performed in enough shows that I could have added a theater minor to my biology major, had it occurred to me. In grad school, I found myself lonely among the science-heads. I auditioned for a play, but I’m really not a very good actress. Where they didn’t know me, they didn’t even toss me the bit parts I’d had before.

(Yeah – the role I played in Equus? I totally got it because the director called me when the actress he’d cast was so offended at the role’s minor nature. Ask Jeffe – she’ll do it! It was fun, too.)

So, I thought I could break into the scene and make some little friends in the bargain, by taking a class. Finally, I was noodling about creative writing and I recalled how the Assistant Director of Equus had been an MFA student in playwriting and his adviser suggested he learn how to direct, to better understand how a script comes alive on stage.

(He also might have been a handsome blond from New Orleans with whom I had a little love affair, but that’s beside the point.)

It didn’t work out so well. I remained an outsider in the theater clique. Plus, because I was an outsider, I had a great deal of trouble casting my scenes – all the best people got snapped up by their friends.

However, I did learn something very interesting that serves me still today.

Though I seem to need to relearn the lesson, over and over.

The course culminated in two nights of One-Act Plays open to the public. Five of us put together about half an hour long plays. Mine was this creepy one (I forget the name) about a cold marriage where the wife kills the husband’s cat – either deliberately or through negligence. The husband then channels the cat (either becomes the cat or just flips out), stalks and attacks the wife.

It was a cool play.

And people liked it. They really liked it! (That’s me channeling Sally Fields.) I loved people telling me how they enjoyed it, with their faces lit up. You don’t get that in science. Then they’d say, “except I didn’t get if she killed the cat on purpose or not.” Or they’d say “I didn’t really understand if he was crazy or if it was the cat’s spirit.” This wasn’t in a contemplative, I’ll have to mull over the implications way. They were genuinely confused.

I realized that, in every spot of this little 30 to 45 minutes, where I hadn’t been crystal clear on what was going on, the audience hadn’t known either.

I thought I could leave some bits murky, but I lost them in every place I did.

Yeah, you know where this is going. I’ve completed the storyboard for The Body Gift. You can see it in all its Post-It glory above. I’m eliminating an entire POV, because its murky and I have a choice of de-murking (yes, that’s a word) or nuking it. I’m not sure I can de-murk, so off it goes.

The pink and dark blue notes? Those are places where I’m not crystal clear on why the characters are doing and saying what they do and say. See, my particular curse as a writer is I follow the characters and write the story as it happens to them. This means that I have to find out things about their world that they don’t tell me straight out. It doesn’t feel to me like I get to make it up.

The writers who plot out ahead of time call us Pantsers, because they see us as flying by the seat of our pants. I prefer the term Mister. That’s how it feels to me – like I sink into the mist and things come to me out of it.

It’s just not always easy to get the exact right thing to come out when I want it.

But, it’s clear I have to. Where I was murky on this story, the readers were confused.

And remind me next time.

7 Replies to “Murky Is as Murky Does”