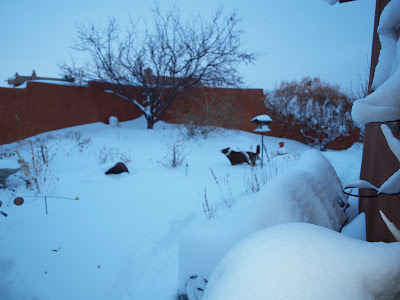 Did I say I wanted snow?

Okay, so the highways are closed. David has two finals today and we have no idea how the school will handle that. Considering that our rather long driveway is knee-deep to hip-deep in snow, I doubt David would be going anywhere even if they open the highways.

Yeah, you can say it now: Be careful what you wish for.

I received happy news last night that Sapphire made a bit of a conquest. The editor I sent the story to really loves it. She had a few issues with it and invited me to revise and resubmit, though she understood if I didn’t want to. These kinds of requests can go both ways. If you’ve been reading my blog for a while, you know I’ve revised before, to no avail. This is a different opportunity because she sent me a very detailed description of what she’d like to see revised. Better, they’re all really good suggestions. I really love getting to work with a sharp, effective editor.

A really excellent editor brings out the very best in your writing. Conversely, a bad editor can crush the life out of your work. By the way this gal zeroed in on the important aspects of the story and deftly picked out the weak spots, I’m thinking she could be one of the best editors I’ve worked with.

Not to mention that this is a very desirable press.

So, of course I’ll revise. It shouldn’t be too difficult. And when I wrote to say so, she replied that she’s delighted to hear it. All kinds of joy in Mudville.

The big question for me now is, do I set the new novel aside to do this, or work on both? I wrote a post for the FFP blog the other day, comparing writing a novel to raising a child. The new novel is just a toddler and requires a lot of daily attention. But now my teenager has her first big job opportunity. She needs new clothes, a haircut, pumps and hose! Kerry suggested that I give the toddler just enough attention to keep Child Protection Services off my back.

It’s an interesting problem, how to balance multiple works. When I started out writing, I wrote essays, usually in one sitting. I could hold the essay from beginning to end in my head and set it down on the screen. When I transitioned to longer works, I had to find a different way to see the story, because I couldn’t hold the whole thing in my head. At least, not in my conscious mind. I think I’ve gotten better at letting the entire story, including sequels, play out in my subconscious mind where I can look in on various scenes, to write them down. This requires a certain amount of immersion in the story for me.

To move two stories forward at once feels like another level of challenge. I know a couple of people who do this. Some alternate days or weeks on particular projects. Writers with contracts are often saying how they had to set aside a manuscript at the best part because edits arrived from their editor on another project with a one-week deadline.

I might try doing both at once, just to see if I can.

Heck – there’s not much else to do in January, is there?

8 Replies to “Snowfall and Sapphire”