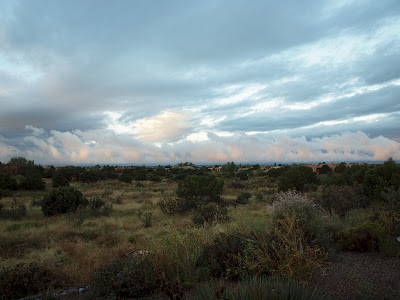 We sit up on a hill, with Galisteo Basin and the densest part of Santa Fe below us. The dramatic reverse of heavy rain after weeks of baking sun, leads to fog the following morning. It flowed in rose-tinted waves at sunrise, up and out, back into the vast sky that brought it.

Apparently I’m in a poetic mood this morning.

I get that way sometimes, where I feel an upwelling of something inside, something sweet and bubbly, and I want to send it out into the world. It can take an odd form, depending on where I’m at.

I remember when I was young – maybe 8 or 9? – and we were on a field trip for school. This makes me think I was 8, because in 3rd grade I was in this experimental class where we spent a whole bunch of time traveling around Colorado learning history. I think it was intended to give us hands on stimulation. That was a strange time for me, because there were only two other 3rd graders in this class, a few 4th graders and a whole slew of 5th & 6th graders. We’d all been flagged as gifted or talented or perhaps just oddball. On bus trips, our teachers would have long division contests and kids who got the right answers received prizes. I always put up my hand and guessed answers, even though I had yet to learn multiplication tables, much less division. I always figured I had a shot of getting it right which, of course, I never did. This practice had the additional bonus of annoying the other kids, making me more of a social outcast than ever. In an odd way, though I knew this, it didn’t really bother me.

But that’s all beside the point.

On this particular trip, the teacher announced that this particular girl – older, pretty, very popular – was moving away. Tomorrow would be her last day at the school and we should all be sure to say good-bye and wish her well. She was one of those people who are inexplicably liked by everyone, as if she carried a bit of sunshine with her and people just liked to bask in it. She was likely 11 or 12, but to my 8, she looks like Bo Derek or Farrah Fawcett in my memory.

I went home from school, put Perry Como on my 8-track player (which would cycle endlessly) and set up my little folding table. I made clay animals for this girl whose name I can’t remember. I made probably a dozen of them. Into each one, I poured my admiration for this girl everyone liked so much.

I dried them in the oven, painted them and put them in a little box to take to school the next day. When my mom asked who they were for and I told her, she said she’d never heard this girl’s name before and didn’t know she was my friend.

My mother clearly didn’t understand that a young goddess like this wouldn’t be my actual friend.

You can imagine the scene. I marched up to her at school and gave her this fairly extravagant gift of a box full of little clay animals. I was reasonably good at it and she was surprised that I’d made them. That I’d made them for her. I still remember the surprise and confusion on her face. The discomfort, because what I’d done was clearly weird. But she was a nice person and thanked me.

Still, I understood that this had been over the line.

Looking back, I think what I was giving her was more of a tribute. Perhaps I hoped for some of her charm to rain on me. Frankly, I hadn’t really noticed her much until I saw everyone gathered around her to say how sad they were to see her go. I wanted that in a way I hadn’t known to before.

I still admire those with the gift of popularity. I can see how their natural charm, their sunny attractiveness draw people to them. Sometimes I try to emulate it. But I still have enough of that weird kid in me, the one who can listen to the same favorite soundtrack twenty times in a row, that I can’t quite get there.

(A boyfriend once cited the same tape loop in my car as one of the reasons for break-up – I’m not kidding. I mean, I would have changed it if he’d asked. It just happened to be my favorite album at the time and I wasn’t done obsessing over it and, well, yeah…)

Ultimately it comes back to that I’m still the one who will put up her hand and ask the uncomfortable question. Sometimes I impulsively give gifts that are too much. too out of the blue. I’m very bad about saying things I shouldn’t. Every once in a while, I envy those with the crowds of admirers. I think it must be pretty neat.

I remember that embarrassed girl, with her box of clay animals. I’m still her.