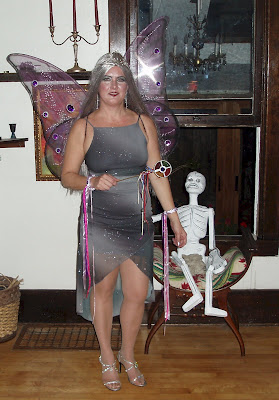 What are you going to be for Halloween?

A friend of mine mentioned on Twitter the other day that it was already time to start thinking about Halloween costumes. I knew she meant for her daughter, but she and I have been friends since 1st grade. So, I replied, “What are you going to be for Halloween this year?”

The question echoes through all our years of growing up. There was a time in all our lives when that was a crucial question. A major decision. Should I be a cat or a witch?

Once you made your choice for the year, you had to live with it. It defined that time. That was the year I was a Hula Girl. Remember the year I wanted to be a hatching chick and Leo made me the papier-mache egg costume?

Of course, school made it a big deal, what with the parades and parties. Halloween night in Denver tended to be a bit of a bust, since it usually snowed, forcing us to cover our costumes with parkas and scarves. But we were better off than some places who didn’t allow trick-or-treating at all.

I recall how reluctantly we gave up the costumes and the childhood attachment to what we would “be.” In middle school our parents informed us we were too old to go trick-or-treating. Sure we could have parties, but costumes were often out. A new sense had emerged that dressing up for Halloween was uncool. Costumes were silly. Even today, there are adults who flatly refuse to wear costumes for anything at all. Too much effort. Too embarrassing. Inside them, I know there must be children who pondered with enthusiasm and excitement just which fabulous creature to be for Halloween.

The question was an echo, also, of the one every adult asked us: What are you going to be when you grow up?

To which we were often handed a pre-established list of choices. The eternal round of doctor, fireman, teacher, nurse. The Halloween question we asked each other and the answers were infinite. Never mind how many Mutant Ninja Turtles there were in the heyday. Every princess became a unique snowflake. Every pirate had a particular style. In our imaginations, we became beautiful and valiant, terrifying and strong.

We became more than what we were.

What would it be like, I wonder, if we carried that tradition all our lives? I would love to hear adults turning to each other in September and asking, what will you be for Halloween? Recall the childhood rules: you can’t repeat a costume, cuz that’s lame. You can’t be the same thing as your sister or your friend, unless it’s a group theme.

Most important: have fun and let your imagination run wild.