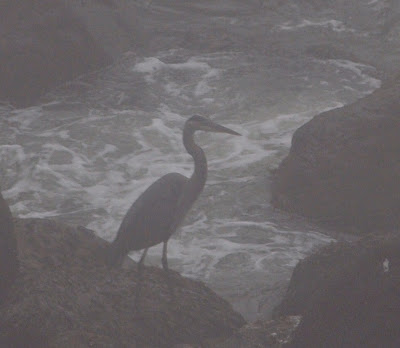 Fog isn’t something we get a lot of around here, so I enjoyed Oregon’s coastal mists. This heron hunted the tide pools, barely visible. The telephoto got him, though.

I remember one of the first times I saw those kinds of maritime fogs, in Davis, California at a conference.

Somehow I’d ended up on the board of our local new chapter of the Association for Women in Science (AWIS). A grant had been obtained and the group planned to send two members to a leadership conference sponsored by the national organization. However, so far only one person had stepped up to go. Hell, I said, I’ll go.

For some reason this is a very hazy memory for me. I was heavy in grad school, I know. After my Great Mistake but before David, which makes it sometime between spring of ’89 and winter of ’91. I think it was a hard time for me. I grieved for my lost college family – never again have I been privileged to be around so many truly amazing people. I lived alone. My love life was going poorly; I pretty much hated everything about grad school (which is designed to break your spirit, anyway), especially my manic/depressive Hungarian major advisor, though I couldn’t face any of that. I was in my early 20s, and most women agree it’s the worst age for us.

I went to this conference with no particular goal, no strategy, except that someone offered to pay for me to go. Morning fogs burned off into bright days and all of these women scientists gave talks about their paths and what their careers had been like. Everyone was brilliantly encouraging in a way that made me feel like a blossom in the sun. No scathing frowns like those doled out daily by my crazy Hungarian advisor.

One woman gave a talk and she was a writer. I can’t remember a damn thing about her – her name, face, what her career deal was. She might have gone from science career to writing? I do recall that her mother attended, which means her speaking was probably an honor and a big deal. At any rate, feeling inspired, thinking maybe this was what I really wanted to do: be a writer and write about science, not this horrible slog through the muck of research, I sat near this woman at lunch and said something along those lines.

And she was mean to me.

Mean enough that I started crying.

Oh, I tried not to show it, sucking up my shameful tears into my sandwich. But I remember the mother throwing me sympathetic looks while the writer-daughter went on about how hard is was to be a writer and all of the stupid, foolish people who thought they could just waltz into it.

Why it hit me so hard, I have no idea. I don’t know if she even gave me any good advice – I was just trying not to let everyone see me cry.

I don’t tell this story often. In fact, I’m not sure what made me think about it now, except for something about the heron in the fog. I couldn’t say whether that incident really affected my writerly ambitions one way or another – I neither gave up at that point nor raced out to prove her wrong.

That woman maybe never realized how hard I took her words. Maybe she was frustrated at not making more money. Maybe she’d just lost an agent or a book deal. It could be she wasn’t accustomed to being in that position, where someone might want to be like her.

But it’s a good lesson, no matter where we are in our writing careers. We should be careful of those who look at us with shiny eyes and hopeful ambition.

We were all that girl once.

15 Replies to “Herons in the Mist”