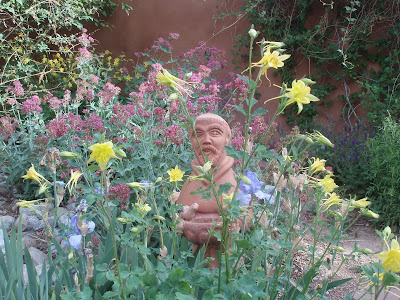 I didn’t notice, until I went to take this photo of the pretty flowers, that St. Francis is now blind in one eye.

Apparently some sort of insect has built a cocoon or egg sack in the cavity and sealed it over. I can’t decide if St. Francis’ love of all animals extends to insects. You don’t really see him depicted with, say, a preying mantis on an outstretched arm. Still, life is life and I’m inclined to let whatever it is develop as it will.

That tends to be my philosophy on most everything. And not just because I’m lazy.

I think that’s why Taoism fits me well: just let it flow, swim with the tide, ride that wave into the shore.

It’s how I write, too. I usually have just a general idea of what happens, but not exactly. For example, right now my characters are visiting this sacred altar. I knew it wouldn’t be easy to get to, being secret and sacred and all, but I wasn’t sure what the tricks and traps would be. I found out as my characters went along. Now that they’re there, I’m not sure exactly who or what occupies the altar. It hasn’t jumped out yet, either, which gets kind of frustrating.

I’m really not sure what I think about this kind of thing. Robin McKinley, who I just love, and who writes this nearly incoherent, stream-of-consciousness blog that I can only sometimes bear to read, writes here about why there’s no sequel to Sunshine, a book well-loved and which clearly ended begging for a sequel. She does the thing some authors do, saying that the stories come to her and she can’t make it happen. Other authors talk about their characters talking to them. The pre-plotters brainstorm it all out ahead of time and then, depending on their technique, either write it exactly that way or let the story wind around that structure.

I don’t know if I believe in the “stories are given to me thing,” though it fits within my Taoist inclinations. I don’t know that I think it all up myself, either.

I do know that the answers don’t come to me unless I’m writing what’s happening to the characters. Or letting the scene play in my head – that sometimes works. I think sometimes that it’s a combination of both, like most things. I point the imagining part of my brain in a particular direction and let it run. The neurons pull the energy from wherever they do and spin the story. Part of me can see it and part is blind.