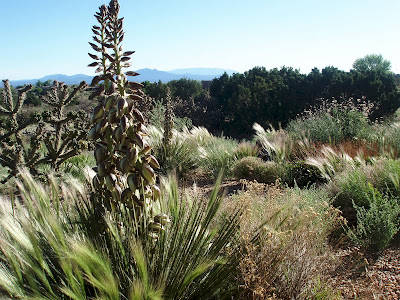 David calls these horsetail grasses. I don’t know that the name is right, but I won’t argue. I just like how they look when they flutter in the breeze.

The yucca are about to bloom, too. The birds land on the heavy buds now, checking for progress. Or perhaps just for bugs on the buds. Hard to say.

This was one of four photographs I took, trying to get the right angle, so you could see how the grasses catch the light. I pulled the four off of my camera, picked the one I liked best, saved it and permanently deleted the rest.

When I was younger, I saved everything. Albeit, with non-digital photographs, you kind of had to save them, along with the negatives. But I wouldn’t throw away even the blurry ones. Or the ones I accidentally snapped of my foot while loading the film. I saved the box from my Snoopy watch, notes from my friends, love letters from high school. In graduate school, I spent hours Xeroxing articles until I had stacks of them in my office.

Through it all ran a sneaking fear that I’d throw away something important. Something crucial, even.

Young writers do this, too. I certainly did. You just hate to delete the least precious word, much less sentences or paragraphs. Sometimes you’ll be persuaded to remove the prose and you carefully excise it and place it in a safe Outtakes file. After all, those words are singular creation that must be preserved lest it never come again.

There’s an idea that, as we grow older, we’ll discover that the world is not as abundant as we thought. That we’re not immortal, that money really doesn’t grow on trees and that opportunity, having knocked, skeedaddles to someone else, never to be seen again.

Instead you discover that this isn’t true at all. Or rather, not in such a limited way. We’re not immortal, but life goes past your twenties, in a most satisfying way. Money comes and goes and there are many ways to come by it. Opportunities may be lost, but others turn up.

Words and pictures are plentiful. I can delete pages now without a qualm. There will always be more words, ones that don’t need deleting. Photographs that don’t completely satisfy can be discarded in favor of those that do.

I give away books, knowing that if I really want to see one again, I can always find it. I don’t worry so much about covering every little point of research – a general idea is fine and, if I need to know more, I can always find out.

There’s a relaxation to this way of thinking. Perhaps an absence of fear.

Now I really need to go through those old photographs, scrapbook the good ones and destroy the rest.

Except for that one of my foot. I’m kind of sentimental about that one.

6 Replies to “Nothing to Fear but Deleting Itself”