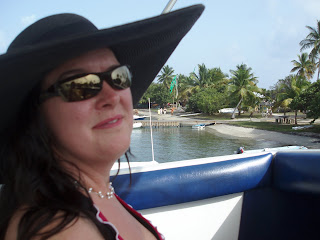 On the second day of vacation, they slept in.

And it was good.

It cut into the pool time and I didn’t get any wordcount in, but it was great. I love the fur-family and we both miss Zip and the kitties. Sleeping in without being walked on or whined at was quite lovely, however.

We went an ate breakfast and cleaned up and lo, and behold, it was time to head to the airport for our adjusted plane flight time of 2:00. Or 2:30.

The other day, I emailed the place we’re staying, Guavaberry Huts, to double-check that the Jeep rental people would be meeting us when we landed. Actually, they responded, the Virgin Gorda airport was closed and Sunshine Air would be flying us to another of the British Virgin Islands, Tortola, and someone from the Tourism Board would meet us, take us to a ferry that would bring us to Virgin Gorda, and there, at that ferry dock, we would indeed be met by the Jeep rental people.

I did try Googling why the Virgin Gorda airport was closed, and only found an article about crosswinds and how the airport was .

Sunshine Air did call, also. I received their voice mail when we landed in . They say in the message that the flight will be at 2:00 instead of 11:00. Apparently I was supposed to call and confirm 24-hours ahead. The gal suggests I forgot. She was nice, so I didn’t suggest that no airline requires you to confirm in advance anymore. She doesn’t mention the thing, so I do. She’s sorry. But maybe we get to see some sights, yes? Sure, we’re fine. The flight’s now at 2:00, I ask?

So, David and I go to the airport and check in. The guy who checks us in has to make a phone call, then painstakingly hand-writes a form. He ruefully informs us that our 11:00 flight is now delayed until 2:00. Or 2:30. As it was 12:45 then, it seems like he should know that we had some clue of this, but we just nod. We get one “boarding pass” for the two of us, that looks a lot more like an NCR receipt, but TSA doesn’t blink.

We went and drank a couple of rum concoctions while we waited. The departure screens reassuringly reflect that we, indeed are on a flight to on Air Sunshine. At 2:30.

We wait at the gate. And wait. is there and far more organized in that they actually have staff at the counter. They also have flights to , but not for us. In fact, they become highly annoyed if anyone looking for Air Sunshine or Laria (billed as THE airline of the ) asks them questions. A sign under the Sunshine Air logo says an agent will arrive before our flight and that we should stay in the area.

David eventually tells me the tv monitor shows our flight as departed, so I ask a guy who looks official by the Air Sunshine counter. He tells me he’s just the Door Guy. But that someone from Sunshine Air will fetch us. And they’d be wearing a yellow shirt. Door Guy has an important job because the sliding glass doors work only sometimes. Occasionally they convene a fairly large group of people to try their security codes on both the inside and outside scanners until eventually one works.

At 2:46, a guy in a yellow shirt, as promised, shows up and says Air Sunshine? Six of us gather around him. He doesn’t care about our boarding pass/receipts. He trots us out to his airplane – he’s the pilot, it turns out – and he points at me to sit directly behind him. I feel like I’m riding behind my dad, and not just because he has all kinds of crap on the dashboard. 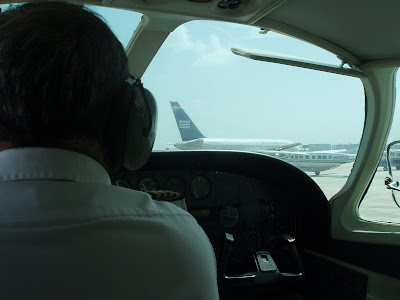 We rumble down the runway and it feel like going too fast in our Jeep, especially when it catches the heavy tropical air. One passenger, who’s clearly a local, tells us we got the best pilot.

It only takes 30 minutes to and we land. There are many welcomes to the British Virgin Islands, but no mention that we’re on . Our boarding passes/receipts still say Virgin Gorda. I remark to David that, had I not emailed, we still at this point would not know that we were on instead of Virgin Gorda, unless we figured it out from the geography. 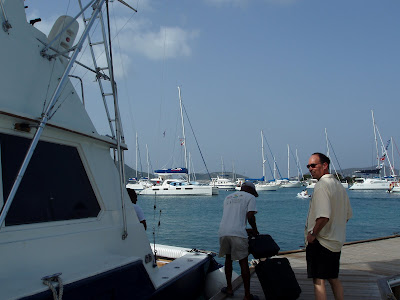 Tourism Board gal is lovely. She explains that we’ll take a ferry to Virgin Gorda. She introduces us to our taxi driver, who taxis us all of three minutes around the corner. Local guy turns out to be local to Virgin Gorda and the three of us board our “ferry,” which is this extremely gorgeous yacht. I kid you not.

I ask local guy what the deal is with the airport and he says nobody seems to know. It’s a mystery. I mention the crosswinds in the article and another local guy laughs and says “The crosswinds were there before the airport.” 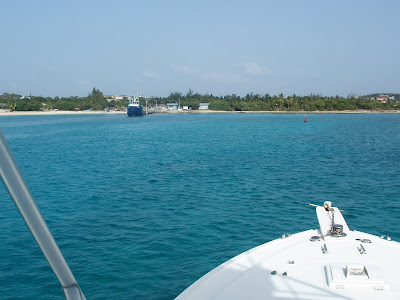 Lo and behold, the Jeep people do meet us at the dock. Everyone is spectacularly

warm. The island is gorgeous.

Our little house is amazing, with a tremendous view. Here I am, calling my mother on undoubtedly expensive roaming, to let her know we didn’t die. 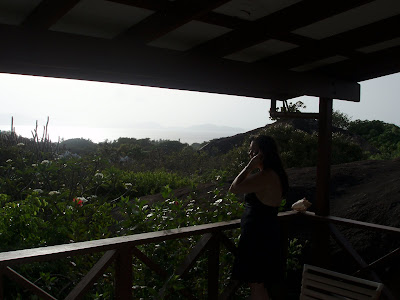 As exhorted by our hostess, we went down to the private Guavaberry beach for sunset.

We went to dinner at th

e Top of the Baths, which was both delicious and gorgeous. And we were the only patrons. 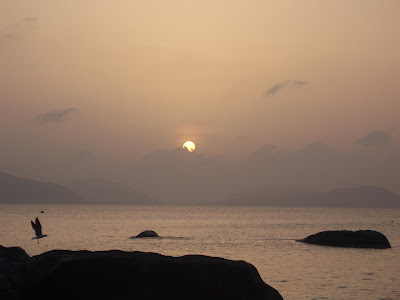 I sit out on the deck writing this in the tropical night air. And finish with that same full moon, a little blurry from the moisture, but so very lovely. 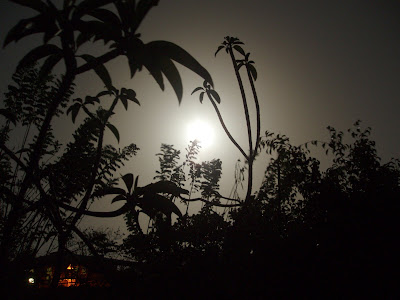 4 Replies to “Welcome to Paradise”