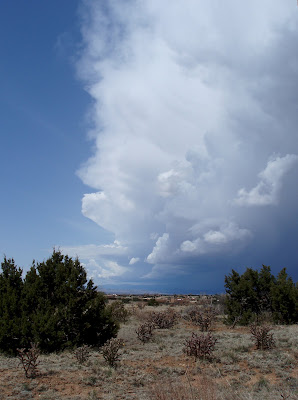 A dramatic arrival that produced nothing in the way of storm-action. And here I was hoping for a real gully-washer.

I spent some time this weekend digging out the culvert at the end of our driveway. We have dirt roads out in our community. Long driveways feed off the main roads and lead to the houses. Like most of the desert Southwest, we’re subject to ferocious rains. Monsoon storms drop relatively huge amounts of water, which all runs down washes that are normally dry.

In this case, water would all run down the dirt road that connects to our driveway, primarily in the borrow ditch next to the road. The only problem with that is our driveway would be in the way of that. Thus, all the driveways here have culverts at the juncture of driveway and road, to allow the water to run under.

This works just fine as long as the culvert isn’t filled with dirt.

Actually, I had two problems: a dirt-filled, neglected culvert yes, but also a wayward Direct TV van. I kid you not.

See? And you all argue with me when I say TV is evil.

During one of our last big snowstorms, a Direct TV service van slid off the dirt road and into our borrow ditch. Many people here treat deep snow as an opportunity to drive fast on crappy tires. It’s mind-boggling, really. So, this guy comes barreling down the road – yes, I saw him do it – slid all over and into the borrow ditch. Then he tried to get out. Mud fountaining up through the wet snow. We watched, since we figured our mailbox was not on his radar, but really didn’t want to have to go out and help. Finally a couple of passers-by who were much nicer than we are pulled him out with a cable and a pick-up truck.

(Incidentally, the Direct TV guy, once liberated, then attempted to pull a U-turn, though there are several ways out if you just follow the road and manage to stay on it. But no, he had to do a U-turn, that turned into something like a nine-point turn and nearly got himself stuck in opposite borrow ditch. If he had, we’d have been forced to go out and hurl his keys into the storm.)

It’s too late to make this a short story, but the end result was our ditch got torn all to hell and gone, with enormous (now dry) furrows. I seriously considered calling Direct TV and telling them to come fix it, but I decided it would be infinitely less aggravating just to dig it up myself.

Besides, I need the exercise.

Now, when I was a little girl, I tried to build a pond in the back garden. I built an earthen dam and canals, various channels, waterfalls and progressive lakes. It was a thing of beauty, I tell you. Which all promptly dissolved into sludge when I added water. My first experience with Taoism.

The great thing about Taoism is you learn lessons by observing nature. This time I paid attention to where the water would want to go and dug accordingly. Eventually I want to line the culvert area around our driveway with rocks, to make it look a little more “on-purpose.” So I cleared a space for the water to run. It doesn’t look great right now, but I have high hopes that a good gully-washer will clear the way.

If I did it right, nature will help me out this time.

It will be a thing of beauty, I tell you.