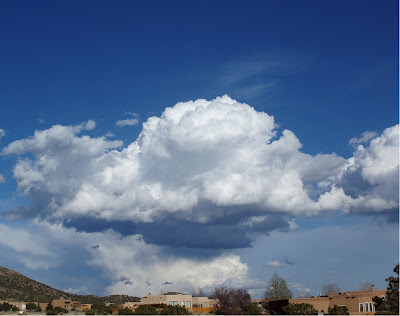 The days are starting to shift here into the warm weather pattern.

Black-bottomed cumulus clouds cruise by like Spielbergian starships hunting for a tattered group of rebels. When the rain falls, it’s both fury and benediction.

Most of my life, I’ve lived in places where the weather comes from a direction. In Denver, the clouds build up over the western mountains all day, until they build up enough gumption to pour over the top and into the basin below. We could track the approach of a winter blizzard by the recitation of pass closures in the mountains: Aspen, Vail, Rabbit Ears, Loveland. By the time Loveland Pass and maybe even Eisenhower tunnel closure, we knew it would be upon us.

It was much the same in Laramie. Not surprising because it’s part of the same geography. The weather there streamed up from the mountains. Storms in Steamboat Springs landed on us an hour later.

Every once in a once, in both Denver and Laramie, a winter storm would charge over, then slow and back up again from the east. Those were the heavy snows.

Here, the weather blows up on top of us. The wind can gust from any direction. Storms pounce from any direction. I’m no meteorologist, but I think we get wet air streaming up from the Pacific currents in the southwest that combined with the Rocky Mountain chilled air. Our humidity levels drop from 45% to 10% as the day warms. Up above, the cool dry and the warm wet foment, spinning cumulus clouds that shoot off in all directions.

I suppose I could look up the meterology, but imagining the poetry of it all is more fun.

For predictability, it’s no good at all. The forecasts are often wildly wrong.

But for drama? For the sheer delight of vista and power? Just fabulous.

You can tell which camp I’m in.