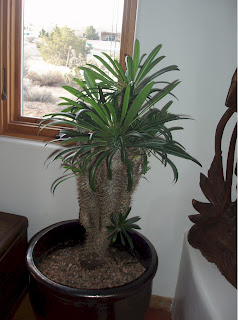 It’s amazing the results you can get, when you give something what it needs.

The trick is, figuring out what that is.

This little Madagascar Palm is our Exhibit A for flourishing in our new environment. The picture on the left is one I took this morning and the one on the right was from last summer. Yes, I did repot it into a much bigger planter (which was free with Bunny Bucks from Jackalope – woo hoo! love this town!), but the palm demanded repotting within a few weeks of our moving here, it was growing so large, so fast.

I should also mention that the picture on the right is pretty much how that palm looked for something like 15 years. I kid you not. In the early years of our relationship, when we had practically no money, David and I would take road trips for spring break. We’d head to the desert Southwest to get as warm as possible as quickly as possible. Often we’d end up somewhere in Nevada where the casinos provided very cheap lodging. (Harrah’s in Laughlin for $19 per night – ah, sweet nostalgia.)

We would also buy cactus.

It sounds funny now. I don’t know why we liked to buy cactus. Except that they were unusual plants that we didn’t see in Laramie. And they were inexpensive and fun. We bought quite a few over the years and most died. The Madagascar Palm hung on, but now I suspect it was kind of in stasis. The palm version of cryogenic freezing, in hopes of being awakened in a better future.

Several people made interesting comments on my last post, about changing the physicality of writing when you get stuck.

Keena said she does as Marin suggested, and actually does move to paper and writing out longhand. Marin mentioned a writer who always writes longhand because it slows him down, causing him to be more careful. This is a diametrically opposite approach to the “fast draft” or “shitty first draft” method that many writers like to use today.

I suppose the point is that sometimes you have to mix it up. Try new things and see how they work.

You never know what might make you really flourish.