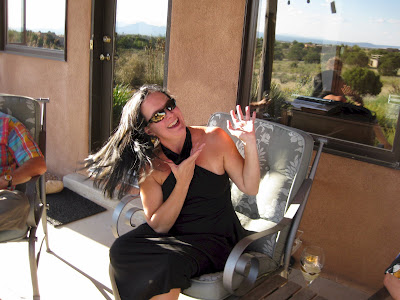 No, I have no idea what I was doing in this picture. My mom took it of me on my birthday and it cracks me up.

It’s apropos of nothing, really. Except that I’m clearly telling a story.

For those of you not on Twitter, there’s this deal where you can use what’s called a hashtag. People can add the hashtag to their message (yes, part of the 140 characters) that makes it searchable. So, if you go to Twitter.com, you can enter the hash-tag #queryfail and see all the posts related to that.

What you’ll see is primarily agents snarking about bad queries. It can be useful, especially for very new writers who have no idea how an agent sees things. One agent has started a new hashtag #thingsIshouldnotseeinaquery. Some examples:

“I am really quit unremarkable in all ways.” #thingsishouldnotseeinaquery

“I am positive that it will be a colossal seller.” #thingsishouldnotseeinaquery

See? It can be really amusing. It can also get pretty snarky in the way things can when only one side of the interaction gets to be snarky. We all like to bitch about the annoying aspects of our working lives. I certainly do. But I have to be exceedingly careful about it. I’m not one of these writers who goes bananas that agents are parasites and we don’t need them. I really want to work with an agent because I believe in what they are able to do. But agents hold a lot of power over writers, so I sometimes have issues with the condescension.

One day an agent, intent on showing how pressed and busy agents are, tweeted that agents do reading for new clients almost entirely on their own time. I really wanted to reply that any of us whose jobs involve recruiting new clients and building new work have to do that on our own time. I know I do. That’s how business works. Selling to new clients isn’t billable and work for existing clients must be prioritized. Of course, I thought better of saying this because I didn’t wish to antagonize her. I’m still a supplicant in that world.

I have issues with a system where I feel like I’m not supposed to speak truthfully.

Last night I received a rejection on a query that truly took me aback. The agent took the time to tell me exactly why she was passing, which is kind of her, but I ended up wishing she’d given me the standard “not for me” because her reasons seemed so, well, foolish.

She had three points, in essence (the numbering is mine):

1) I like to see the relationship between the hero and heroine develop pretty quickly in a romance, but the beginning of this partial read more like a thriller or romantic suspense to me.

2) I also don’t love the use of the dream sequences as they can take the reader out of the narrative.

Okay, these first two are very standard romance formula “rules.” I must say it’s the first time an agent has quoted them to me rather than a contest judge. And this is definitely a choice on my part. I’m not much for rules. I don’t like lighting-fast relationship development and I think my heroine’s dreams are crucial to the novel, because it’s part of the movement between worlds. I can give her these though, even if it makes me wonder that she’s so wedded to these rules. It’s entirely possible they’re just a standard reason to throw out, to back up that she just doesn’t love it.

3) Finally, I was a little surprised that Jennifer’s profession was the same as yours, mostly because it didn’t seem to add to her character or to the plot in any major way. It seemed coincidental, and yet nothing in fiction is really coincidental…

Jennifer is my heroine and she’s a neuroscientist. It’s important because, when she becomes a sorceress, her scientific approach and way of thinking affects the magic. I mention that I have a Masters in neurophysiology, by way of giving my credentials, that I can write a woman who thinks this way.

I’m not really sure what this agent is implying, but it seems she thinks I’m lying somehow. Maybe I really *am* a neuroscientist who’s traveled to Faerie and become a sorceress and this is all really nonfiction that I’m dressing up as a novel???

And it kind of bothers me that I clearly told her my profession is environmental consulting, which means she really didn’t read closely. Which is also fine; it’s the Blink thing, whatever.

It struck me as an unprofessional response, however. Kind of a #queryresponsefail. I’d really love to tweet it, which I don’t dare do, since I’m a supplicant.

I’m taking a risk writing this blog post, really. I almost didn’t do it. But I don’t feel like I don’t dare speak up.

I won’t advertise it on Twitter this time, however… My bravery only goes so far.

One Reply to “#queryfail”